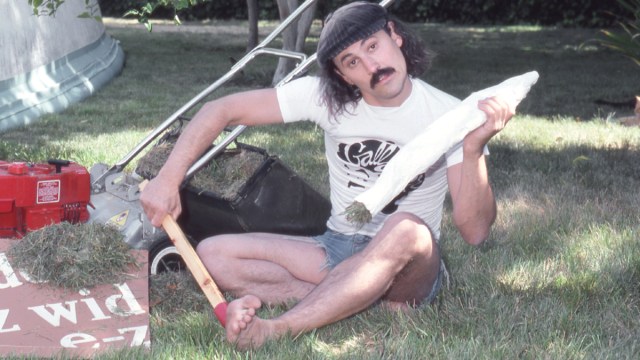 Prop comedian Gallagher, whose full name was Leo Anthony Gallagher Jr., has died at age 76. His longtime manager said that he passed away due to massive organ failure while under hospice care in the Palm Springs area in the early hours of Friday morning.

It had been nearly a decade since Gallagher had performed comedy, as he had reportedly been in poor health for years, having suffered from numerous heart attacks.

“Gallagher stayed on the road touring America for decades,” his rep told TMZ. “He was pretty sure he held a record for the most stand-up dates, by attrition alone. While Gallagher had his detractors, he was an undeniable talent and an American success story.”

Gallagher first began doing standup comedy after college, and got his big break appearing on The Tonight Show Starring Johnny Carson in 1975. Throughout his career, he recorded over a dozen hour-long comedy specials for HBO and Showtime, such as Stuck in the Sixties, Melon Crazy, and Overboard. His specials invariably always ended with Gallagher bringing out his trademark Sledge-O-Matic to smash watermelons, apples, and other random items of food.

Although he was unmarried at the time of his death, Gallagher is survived by his daughter Aimee, his son Barnaby, and his brother, Ron Gallagher.

The brothers famously had a falling out in the ’90s after Gallagher gave Ron his blessing to perform comedy shows impersonating him, on the contingency that he clarified in promotional materials that it was Ron Gallagher, not Leo Gallagher, who would be performing.

However, after a few years, Ron eventually began ambiguously calling his standup act “Gallagher Too,” which led to the original Gallagher suing his brother for trademark violations and false advertising. Leo Gallagher eventually won his case, and was granted an injunction that prohibited Ron from publicly performing in any act that impersonated his brother.

In his later years, Leo Gallagher became increasingly bitter about his career. After being named the 100th best stand-up comedian of all time by Comedy Central in 2004, he told The Oregonian: “I looked at the other people and I was trying to find anyone I ever heard of. How could I be behind people I never heard of? … I made 13 one-hour shows for Showtime, which are available on videotape. I invented the one-man show on cable.”

Well, he’s not wrong — in nothing else, you certainly have to give him that!