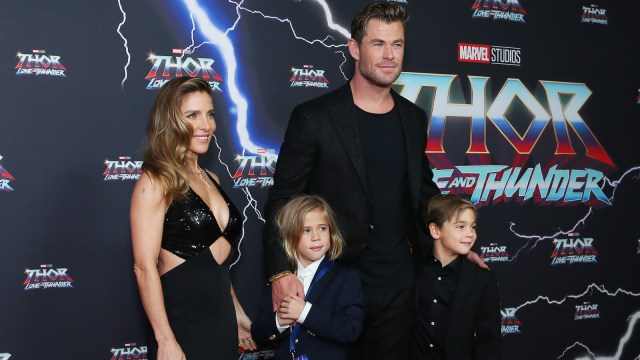 Chris Hemsworth wished his “gorgeous” wife, Elsa Pataky, a happy birthday via Instagram on July 18. The couple met and married in 2010 and have had three children over the last decade — a daughter, India Rose, and twin sons Sasha and Tristan.

The God of Thunder towered over his wife in the image, sitting atop her lap, his upper arm the same size as her entire head. The actor wrote in the caption “happy birthday to this gorgeous lady! Thanks for always being my rock to sit on but way comfier. Love you.”

Elsa Pataky is a Spanish actress and model known for her role as Elena Neves in the Fast and Furious franchise and she has also made some guest appearances in the Thor films as well. Alongside her most recent role in Thor: Love and Thunder as a Wolf Woman (with whom Thor had a relationship with at some point), she also stepped in for Natalie Portman in Thor: The Dark World for the film’s final kiss scene.

Portman had been unable to make the reshoot for the scene and when offered a list of stunt doubles to shoot from, Hemsworth turned them all down in favor of his wife. Pataky wore a brown wig and Portman’s costume and shot the scene, which was quite swoon-worthy, to say the least. There had been complaints that the chemistry between Portman and Hemsworth had never felt right in the earlier films, so it makes sense that the one moment of true passion comes from Hemsworth simply kissing the love of his life.

Thor: Love and Thunder has really been a family affair, as not only Pataky but also their children got involved in the movie, with their sons playing younger versions of Thor and their daughter playing the character of Love, Gorr’s daughter. You can catch the whole family in Thor: Love and Thunder in cinemas now.