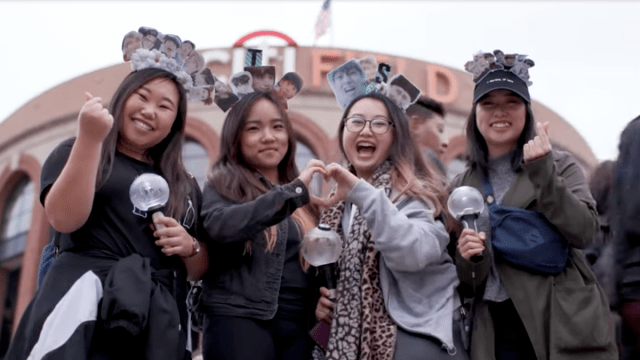 Fans have once again proven their devotion to the 21st-century global superstars BTS by ultimately selling out a pop store focused on selling BTS merch. It is not the first time BTS fans, known as ARMY, have completely sold out an item, from bracelets to cars, BTS’ endorsement and demand are so high, that it seems nearly impossible to keep up with. As a welcomed misfortune, that is precisely what happened to a Canadian pop-up store in Toronto.

Toronto-based journalist Irish Mae Silvestre, who also just so happens to be an ARMY, shared the news of the Canadian store’s “The BTS Pop-up: Space of BTS” temporary hiatus on DailyHive, stating that “it’s not just concert tickets that BTS is likely to sell out — apparently, they can sell out an entire store.”. According to the source, the pop-up store had its opening day on August 31, receiving quite the notorious headlines across the internet due to the massive queues of fans across Toronto attempting to get their hands on every piece of BTS merch they possibly could.

The Sukoshi Mart broke the news of their temporary closing notice on Instagram, as the store found itself severely out of stock, just two weeks after the store’s official opening date. The store is also expected to reopen on Dec. 31, completely restocked and with new concepts aiming to finally endure the demand for BTS merch.

Although it may be the first time an entire store has closed its doors due to having its inventory completely sold out, it is definitely not a foreign concept for BTS fans across the globe to sell out just about anything. From official merch created by the members themselves to brand-endorsed products like Samsung phones and Louis Vuitton bags, BTS fans try to get just about everything that has the so-called “golden touch” by the members. Around two years ago, after BTS collaborated with the famous South-Korean brand Hyundai, the endorsed model for the Palisade SUV had an overwhelming amount of orders, making it difficult for Hyundai to keep up with the demand for the car.

In a joke among fans, Jungkook has proven to be an especially prominent figure when it comes to using his own “golden touch”, selling out even fabric softener, toothpaste, and the famous digestive drink, Kombucha after drinking it on a live. The youngest member of BTS is also famous for oftentimes using independently-owned small brands in his daily life, as was the case for f8kechemicalclub, a small clothing brand that saw an instant increase in demand and followers on Instagram after Jungkook wore one of their full sets during a live.

This only goes to serve as a lesson for any entrepreneur or brand associating with BTS – do not underestimate the power of BTS fans, and more specifically, how widespread their influence is around the globe.