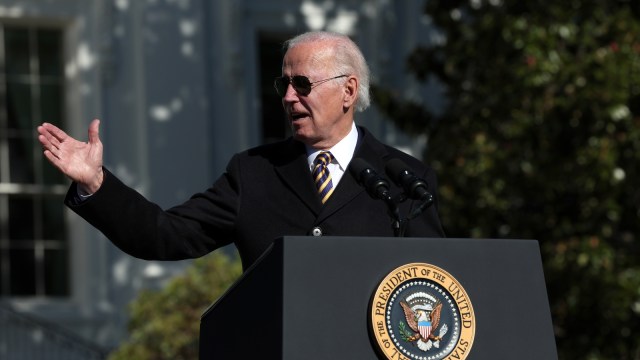 Recently, President Joe Biden got to see one of his grandchildren married off at the White House. The day for Naomi Biden was filled with style and general pomp, and, though the president is old, he does have other grandkids he could do the same for later.

While Biden’s children are well known and one in particular is obsessed over by the public (his name rhymes with Punter), little focus is paid to the next generation of the first family. Naomi is known, but, there are also six others in the mix. A Today writeup from 2020 lists Finnegan Biden, Maisy Biden, Natalie Biden, Robert Hunter Biden II, a child known only by the initials NJR born of a dalliance between Biden’s controversial son and a D.C. stripper, and Beau Biden, who was born during the 2020 election era.

While Biden’s older grandchildren have been in the spotlight and are following similar paths in education, the younger ones mostly keep to their personal and private lives. His granddaughters were at the Democratic National Convention in a video, but, Robert, NJR and Beau are seldom seen or heard from. In older eras, people did not make a big deal out of the children of politicians, but, today, a quick search online will bring up some of the most vile comments about minuscule figures.

Today, people still mention George W. Bush’s daughters were cited for underage drinking when he was president (this somehow made national news and was given detailed analysis at the time), former President Barack Obama’s children are subject to racist comments and unfounded conspiracy theories and several weird things have been said about Barron Trump, which are not worth repeating.

Here’s hoping such behavior is banished to the ash heap of history in the future and family of prominent public figures not involved in what they do can go about their days without being criticized, attacked and assaulted in the public square. If people do not have a problem with Tricia Nixon, Lynda Bird Johnson or Marvin Bush, they should act the same way towards others today.

To do so would only be consistent, and, after all, surely people of a partisan nature are not hypocrites who change with the wind, right? We will not hold our breath for anyone to be honest about this and will keep you posted if Biden has more grandkids later. For now, those interested in learning more about White House weddings through the years can find a list of them in this link.