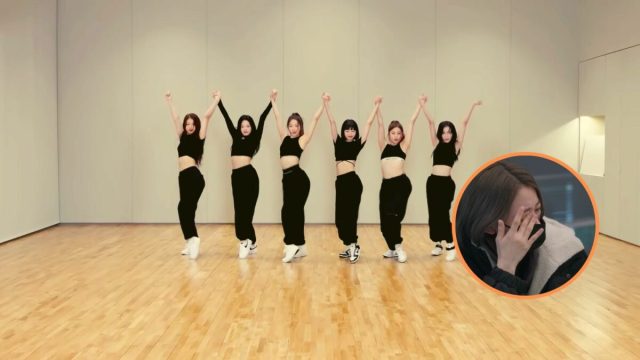 Kpop is notorious for its grueling trainee-to-idol process, which is highly publicized aiming to engage fans in idols’ careers even before they officially debut as artists. LE SSERAFIM is one of those groups, who since their debut on May 2, immediately received quite the press exposure, for the best and worst of reasons.

On Sept.17 HYBE Labels and Source Music released the four-episode docuseries on YouTube The World Is My Oyster, sharing the debut process of their newest fourth-generation girl group, LE SSERAFIM. Being HYBE’s first girl group since 2012, LE SSERAFIM’s debut was a significant milestone for the company, especially considering their pre-debut controversies surrounding former member Garam, who left the group on the basis of bullying allegations. This docu-series also serves as a great insight into the entire process of a new girl group debuting in an industry as competitive as Kpop.

In the third episode of the docu-series, a meeting regarding the promotions for their debut album takes place, led by management team leader Kim Hyeong-Eun. During the meeting between the members and the company staff, Hyeong-Eun brings up the importance of self-management when controlling their meals and weight as the promotion periods are often tied to a moment in which idols are supposed to look their best to promote their newest single or album. “Those of you who’ve debuted before would know how important self-management is when an artist is in promotions. In that aspect, I don’t think you were at one hundred percent. As a company, we will provide you with the means, but in the end, self-management is all up to you. I think you need time to rethink how important this is and for you to manage yourselves strictly,”

LE SSERAFIM’s vocalist Sakura, the oldest of the group, immediately shares her thoughts on the subject, showing her frustration regarding the added pressure brought on by the company. “I’m a bit upset.” Sakura shares, tearfully, “We’ve been working so hard. I don’t want us to have stress about something like this. I’ve seen members struggle and be criticized for these things. I think we’ll have to bite the bullet and try really hard, much harder.”

Another group member, Kim Chae Won, also shared her opinion on the matter, agreeing with Sakura regarding the members needing to work even harder to reach the company’s expectations. “I agree, I wouldn’t have any problems with members having different meal plans. Like Kura said, it’s nothing to get upset about. It’s all for our own good so I don’t think we would mind.”

The fans, for one, flooded the YouTube comments with a heavy heart, saddened and worried by the pressure these young girls are under when they are already so thin.

“I was seriously hoping that the meeting wasn’t going to be about weight, but sadly my fears were realized. For the most part all the girls were super trim and fit so I don’t know who they would have been referring to. When Sakura talked about worrying about putting on weight, my heart hurt knowing how thin she already is.”

“I’m so glad Sakura said that because we all know what he was talking about when he said ‘self-management’ in terms of how they present themselves! It’s true that she’s seen her former members struggle with things like that, that’s not something they should have to be stressing about! That’s how these girls can quickly develop eating disorders, body dysmorphia, self-image issues, etc.”

“The discussion they have about dieting makes me so sad… when Sakura said ‘if I feel like I’ve put on weight I’ll ask for a salad instead’ made me want to cry. There’s so much focus on weight and image and so little focus on actual health in these companies. Not to mention the way the staff members kept saying things about ‘individual efforts’, framing weight loss as something that anyone can do if they try. absolutely disgusting what they put these girls through”

Korean beauty standards have always been taken in the form of extreme slim and slender bodies, with everyone in the spotlight needing to fit into the expectations of what is the archetype of beauty in South Korea. Extreme diets and restrictions alongside extreme workouts have been severely normalized in Korean culture, and even more so among the elite groups in which these idols grow up. BTS’ Jimin is yet another example of a young adult who felt pressured to lose weight, so much so that he underwent a strict diet where he restricted his food intake altogether, causing the singer to faint during rehearsals and even during concerts, bringing light to the dangers of extreme dieting happening in an industry that promotes these ideals.

However, over the course of years, numerous Korean celebrities have come forward with their own experiences regarding the pressure to lose weight, including IU, a popular and beloved South Korean singer who admitted to struggling with bulimia and binge-eating disorder.

The standards for Korean idols are not expected to change any time soon, however, the normalization of normal bodies has had more exposure in the past few years. Idols like Twice’s Jeongyeon and MAMAMOO’s Hwasa, are celebrities who don’t fit the stereotypical image in Kpop, and whose perseverance is absolutely admirable, in spite of the toxicity and judgment from the industry, companies, and society.