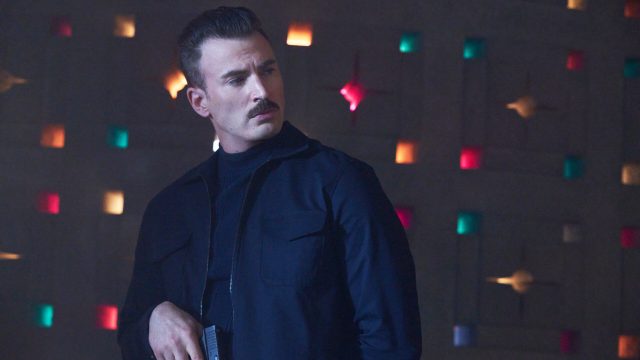 With great power comes great responsibility — and a great mustache. The Gray Man recently had its theatrical debut, with its Netflix release coming later this month, and it’s got all of us thinking about celebrity facial hair.

Chris Evans, Ryan Gosling, and Regé-Jean Page star in the film, and audiences everywhere were immediately wowed by the first trailer. It’s an action-packed spy storyline with a beautiful setting, and Evans’ character was rocking a pretty sweet ‘stache. It’s not the first time we’ve seen him rock a mustache — we’re looking at his Broadway run in Lobby Hero — but it was undoubtedly an eye-grabbing look.

In the entertainment realm, stars constantly change their looks to take on different roles, and sometimes they’re an absolute hit. That being said, there are also times when the facial hair sort of stinks. We’ve done a deep dive into celebrity facial hair, and after some serious deliberation, we’ve put together a list of faces that rock well-styled hair and those that just look better bare.

From the infamous Tom Selleck and Steve Harvey to James Franco and Chris Evans — here are the best and worst celebrity mustaches we love and loathe.

Some men make a ‘stache look absolutely perfect, effortlessly handsome, and quite phenomenal. Here are some of our favorite celebs with mustaches!

Burt Reynolds is likely one of the first faces that pop into your head when you think about an excellent celeb ‘stache — and with good reason. His mustache was as iconic as the man that wore it, and as it changed over time, it still absolutely suited him.

Tom Selleck is likely another name that you immediately think of when you think of a perfect mustache. Selleck, like Reynolds, has kept his ‘stache over several decades, and he rocks it in each one.

Lionel Richie’s mustache is a staple for the music icon, and it never has even one hair out of place. Richie’s ‘stache has remained largely the same over the years, and it’s proof that the age-old adage is correct — if it ain’t broke, don’t fix it.

We couldn’t talk about celeb ‘staches and not mention the man who started the conversation: Chris Evans. Evans has rocked his fair share of facial hair looks over the years, but the mustache made its first debut during his run in Lobby Hero.

While that ‘stache wasn’t a fan favorite, his look in The Gray Man is better suited for the actor. Plus, he credits it for helping him really play the role of his character in the film.

We’ve all poured into theaters to see Top Gun: Maverick at least once by now, and part of the draw to the film is a certain character whose call name is Rooster. That’s right; Miles Teller attracted viewers to the storyline for several reasons.

Rooster was Goose’s son, and it was a tense situation when he was face to face with Maverick — it was heart-wrenching for viewers. The other level of appeal for viewers was Teller himself — the guy is a total babe. He also knows how to rock a ‘stache. If you’re a meme fanatic, you likely saw the posts on social media telling everyone not to try to pull off his facial hair because they just couldn’t — but he made it happen.

Hulk Hogan’s mustache is as iconic as the wrestler himself. While many of this style of mustache landed on our not-so-stellar ‘stache list, Hogan can pull it off.

It’s hard to imagine the icon without the mustache, but it’s happened before, and the wrestler has also gone with a full bushy beard. Hogan is a jack-of-all facial hair trades.

Steve Harvey is another iconic Hollywood figure who has a staple mustache. In fact, it’s something contestants frequently talk about when they appear on his game show.

The ‘stache frames Harvey’s face in a way that, much like Hogan’s, isn’t suitable for most people. However, the philanthropist, host, and all-around well-loved celebrity rocks it like it’s his day job.

Hear us out — we know that Downey Jr. has more than a mustache here, but there was a time when it was only the ‘stache.

Downey Jr. can pull off any facial hair; he can pull off a clean-shaven face — in fact, we’re pretty sure he’d look great in a potato sack. It’s his outer attractiveness, sure, but also his personality that make him the total package.

Henry Cavill is also a man we’ve seen with and without facial hair throughout his time in the entertainment industry — and he looks almost more rugged with facial hair than without it. He’s a 10/10 no matter what!

Idris Elba — need we say more? The man is absolute perfection, and his face with the mustache is just as delightful as it is without it. There’s not a thing Elba can do wrong.

The Not So Great

Even for the stars who fall under the less favorable mustache category, these guys can still rock facial hair. They’ve just gone through phases where fans counted down the days until they shaved the ‘stache or added a beard to it. Let’s take a look.

Justin Bieber does many things well, but not everyone is pro-facial hair on the superstar. Let’s face it, he’s a handsome guy, but fans feel that the mustache takes away from his otherwise quite remarkable facial features. He’s gone through phases of having a bit of facial hair and having none — but he often keeps a clean-shaven look.

Following suit, Ashton Kutcher is someone who could pull off just about any look, but fans weren’t initially in love with the ‘stache he grew back in 2019. He ended up doing an interview about the “spite ‘stache” and how he wasn’t going to cut it to please anyone, and he kept true to his word for a while. Kutcher often goes between having a bit of scruff to being clean-shaven.

How can he be on the best and worst list? Well, when he first debuted his ‘stache for Lobby Hero, fans didn’t know what to think of it. It didn’t take long before the facial hair began to grow on them — it is Chris Evans, after all, but we had to add him for the initial response from fans.

Quite honestly, Evans could have any kind of facial hair, and we’d all adore him; you know we’re right.

There’s not much that Tatum can do wrong, but fans weren’t in love with his mustache when he debuted it. While Tatum looks phenomenal with just a bit of scruff, the mustache look just didn’t wow fans. His face is rugged, and the mustache almost feels out of place.

Michael Cera has got such a sweet look; the mustache just didn’t fit perfectly with it. That said, he’s still got a major chance of stealing your girl — facial hair or no facial hair. Now, when Cera grows out the beard along with the mustache — well, we’re all singing a different tune then.

John Travolta has had many types of facial hair throughout his career, and while some of them are absolutely charming, his ‘stache with the very long sides framing his mouth wasn’t a fan favorite. Like most of the entries on the “not-so-great” side of the mustache debate, things change completely when Travolta adds a beard or some scruff to the look.

Jared Leto has been a bit of a facial hair connoisseur, but fans aren’t largely obsessed with the strict mustache look on the star. When he adds a beard alongside the ‘stache, or just has a face of scruff, well — that’s a different story.

We’re trying not to sound like a broken record here, but Tom Hardy is another celebrity that most people think of when they hear the words insanely handsome. There’s not a lot he can’t pull off. That being said, fans aren’t totally in cahoots with the ‘stache for Hardy.

Of course, there’s something unique about the mustache that makes fan reaction to it sort of a moot point. The fact is — Charles Bronson shaved off his mustache and sent it to Hardy as he portrayed him in the film. Technically, the mustache isn’t even his, so we can’t say too much about it.

In The Binge, Vaughn rocks a mustache that fans actually like. However, there’s a styled mustache where he grows the sides down farther that fans aren’t massively impressed with. Just a slight trim has Vaughn on the better-looking side of the great celebrity facial hair debate.

Ryan Gosling has absolutely rocked a mustache — consider his role in the 2016 film, The Nice Guys. He also looks great with a mustache/beard combo like in the emotional fave The Notebook.

A look fans weren’t obsessed with was the mustache he grew around the time of Lars and the Real Girl. He’s one of the hunkiest men in Hollywood, so he obviously still stole our hearts, but we’re thrilled to see Gosling rocking much different facial hair these days. Actually, at the present moment, he’s rocking none as he films the upcoming plastically fantastic movie, Barbie.

The thing is, even the guys on the less stellar side of the mustache debate are still painfully handsome, so we’re all winners here. Here’s to facial hair: the good, the bad, and the ugly.