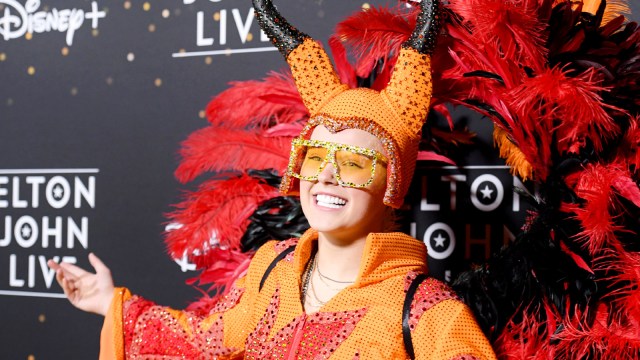 Well, it seems there continues to be no love lost between Jojo Siwa and Candace Cameron Bure. And honestly, we’re here for it.

The dustup between the 19-year-old singer and Fuller House star began over the summer when Siwa called out Bure as the “rudest celebrity she’s ever met.” Though Bure sort of apologized and Siwa seemed to let things drop, their feud reignited last week when the 46-year-old made comments about her conservative new cable channel, Great American Family, making holiday movies for the straights only.

“I think that Great American Family will keep traditional marriage at the core,” Bure told the Wall Street Journal, when asked if her new television home would feature same-sex couples in holiday movies.

Naturally this didn’t sit well with Siwa, who is queer, and called out Bure’s comments as being “rude and hurtful to a whole community of people” in an Instagram post.

Now, Siwa has elaborated on her feelings towards Bure while speaking with People at Disney Plus live stream of Elton John Live: Farewell from Dodger Stadium in Los Angeles on Sunday.

“As I’m getting older, I’m starting to realize what an impact I really do get to have,” Siwa said, noting that she’s “learning that I have a chance to use my voice, use my platform for something good and to change the world for the better.”

“I think that’s a really cool position to be in,” she continues about having a powerful voice in the LGBTQ community, and the support she has received since her response to Bure, 46. “I am being honest and maybe being a little disruptive to somebody’s life, but it’s what I believe in. And so to have good people stand behind you with it felt really nice.”

“We have not [talked], and I don’t think we ever will again,” she says of the status of her communication with Bure after the Full House star, 46, purportedly excluded the gay community from shows on the Great American Family (GAF) network, of which she is the chief creative officer.

Siwa continued, explaining that if Bure really wants to make amends, she should take GLAAD president and CEO Sarah Kate Ellis up on her offer to have a conversation.

“That’s what I would want Candace to do,” adds Siwa. “I would want her to have a conversation with GLAAD. Because even though I am educated, GLAAD is such an incredible organization. Sarah is a genius when it comes to the gay community. And I think that Candace having a conversation with her would be not only eye-opening to Candace but eye-opening to a whole world of people who might have those same beliefs.”

It seems highly unlikely that Bure is interested in or capable of change, so we can probably consider that offer out. Bure followed Bill Abbott, former president and CEO of Crown Media Family Networks, the parent of Hallmark Channel, to Great American Media. Abbott abruptly resigned from Hallmark in 2019 amid backlash for refusing to air a Zola.com commercial featuring two brides kissing.