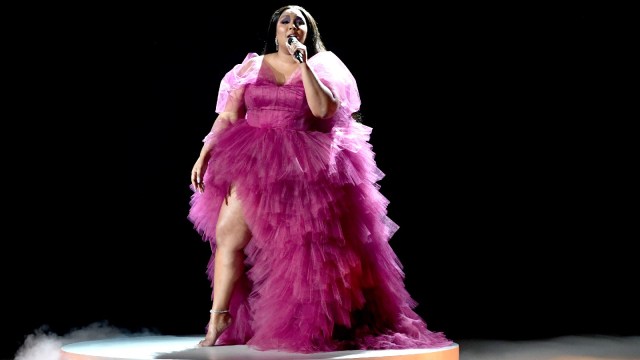 Lizzo is proving once again that she may be the most adept TikTok user out there after she made one fan’s dream come true on the social media platform.

Writer Aurielle Marie recently published her first book, called Gumbo Ya Ya, “about growing up fat, Black and queer,” as Marie explained in a TikTok video. She made a video requesting to wear one of Lizzo’s dresses for what Marie described as receiving the biggest accolade of her career, being selected as one of Out Magazine‘s Out 100. The honor in question is comparable to the Time 100 but for LGBTQIA people, Marie explained.

Despite it seeming like a long shot that a hit-making pop star like Lizzo would let someone wear one of her famous gowns, one fan’s dream came true when Marie eventually unboxed the purple dress in question, which the singer wore during the 2019 American Music Awards. “[I] might’ve gotten a few tears on your dress @lizzo,” Marie wrote.

Marie, whose essays in various outlets have occasionally gone viral, even shared that the dress arrived at her home a mere 20 minutes before she had to catch a flight. Talk about last-minute miracles!

Of course, the entire story warmed the internet’s heart as Lizzo soon began to trend on Twitter.

“Tiktok is so amazing,” one commentator remarked while sharing the story.

“I really needed a feel-good smile story today,” wrote another Twitter user who said they personally knew Marie and her spouse and had no idea it was her when the story first broke.

“Also can we talk about the perfect fit? You look INCREDIBLE. Am I crying? Maybe. Do I care? No,” @felicityward wrote while replying to one of Marie’s Twitter posts about the dress.

“Yes ma’am!! She looks stunning. Lizzo did right by her,” another Twitter user wrote.

That’s not the only Lizzo news that has been lighting up Twitter this week as she was also nominated for six Grammys Awards.

Knuckles the Echidna, of Sonic the Hedgehog fame, also gave Lizzo a shoutout during a recent #AskSonic takeover for absolutely killing it while playing James Madison’s crystal flute recently.