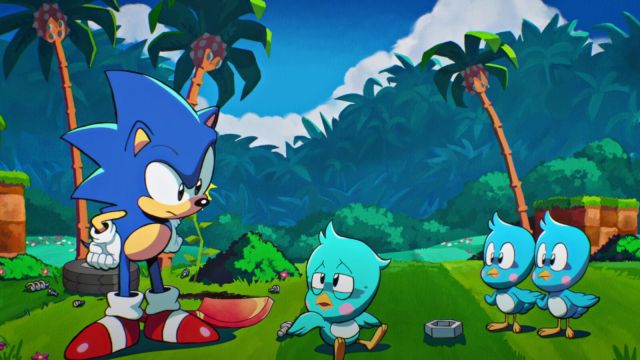 Sonic the Hedgehog fans came out of the woodwork thanks to a Q&A between the blue blur’s official Twitter account and the public utilizing the hashtag #AskSonic.

As the @sonic_hedgehog account explained, users could use the hashtag #AskSonic to ask any of the colorful characters from the franchise questions, within a window of a few hours, and you may just get treated to a fully voiced reply. That includes Sonic himself, his sidekick Tails, Knuckles, Amy, Shadow the Hedgehog, and Doctor Eggman.

In a cool behind-the-scenes photo, Tails voice actor Colleen O’Shaughnessey shared the real-life voice actors in the booth bringing the #AskSonic panel to life in real-time on Twitter.

Sonic actor Roger Craig Smith made a similar post from his booth.

In one question that was likely a throwback to Strong Bad, of Homestarrunner.com fame, one fan asked Knuckles how he types with boxing gloves on. The echidna responded that he uses the spiked part of the gloves to type at a rather respectable 33 words words-per-minute, thank you very much.

In one response, Doctor Eggman revealed a rather juvenile-sounding lunch bag was his secret to surviving cyberspace for so long, as is related to the plot of the latest videogame in the series, Sonic Frontiers.

Aside from the various Sonic characters roasting Eggman for enjoying baby carrots (like the true boss he is because those are delicious), Some of the #AskSonic questions from fans that the hedgehog and his pals have not yet directly answered got surprisingly personal.

For instance, the Twitch streamer GamesCage — AKA Fadel, The Hype Guy — demanded an apology from Sonic for apparently roasting the gamer during a past #AskSonic event.

One commentator used a GIF to imagine how dismissive the person running Sonic the Hedgehog’s account was in the face of Fadel’s repeat request.

Another Sonic fan simply demanded to know who that purple-haired mystery woman was that lit Twitter on fire earlier this year with one a previous fan Q&A.

And that wasn’t the only art of this type with Sonic and a former rival. Can the internet stop already?

The blue blur’s latest foray into videogames is Sonic Frontiers, which We Got This Covered author Jon Hueber gave a glowing review if you’re curious. The game is available now on most modern platforms.