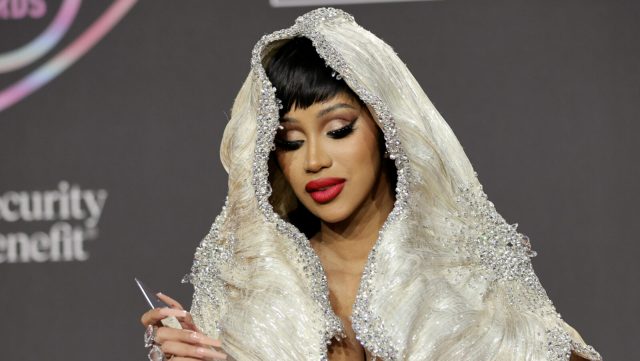 Cardi B is currently on trial for likeness misappropriation over the image used as a cover to her 2016 mixtape Gangsta Bitch Music, Vol. 1. The man suing her has a back tattoo eerily similar to that of the person pictured performing oral sex on the rapper.

During his testimony on Tuesday, Kevin Michael “Mike” Brophy said he felt like his “Michelangelo was stolen off a wall and literally ripped off, robbed, and put where ever these people wanted to put it.”

According to Law and Crime, The New York City rapper attended the second of an expected four days of trial and was represented by lead lawyer Peter Anderson, a team from Davis Wright Tremaine LLP, and her personal attorney Lisa Moore. Anderson said Cardi B wasn’t involved in the selection of the cover art for the 2016 mixtape and is not responsible for its distribution.

The cover was created by a New York graphic artist called Tim Gooden, who reportedly took inspiration from a photograph posted either by Brophy or his tattoo artist.

The lawsuit, which was filed in 2017, is described as Brophy’s last resort, after continuously requesting Cardi B remove the image in question. “It looks like I’m giving oral sex to someone who’s not my wife, someone who’s not my partner. An image that I never, ever signed off on — ever,” Brophy testified.

Brophy is a married father of two from Huntington Beach and is worried his children will one day see the image.

The trial is taking place in the federal courthouse in Santa Ana, California.