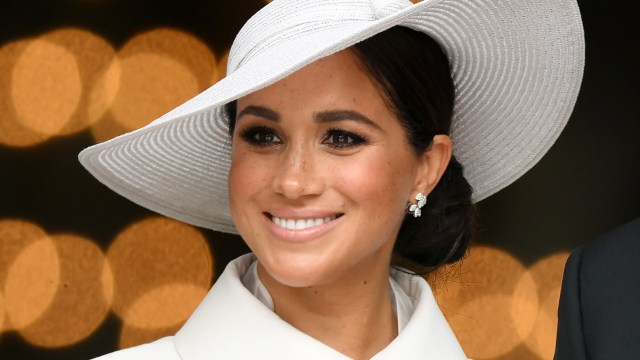 Megan Markle had an in-depth conversation with Mariah Carey about what it means to be a diva on the second episode of her Spotify Archetypes podcast on Tuesday — however, our queen turned the word around on her, taking even the Duchess of Sussex by surprise.

Markle had been talking about how the “Emotions” singer grew to own the term over the course of her career, which can be taken as a compliment or derogatory, depending on the context. “I agree with you,” Carey responded. “But I think on top of that, it’s also for laughs, as me and my fans say. It’s honestly like half of it is just for laughs.”

“Well that’s the thing,” Markle replied, bringing up Carey’s 2002 episode of MTV’s Cribs, in which he showed off her 11,000 square foot Tribeca penthouse. “And yet some people took it really seriously … Everything was all extra and super over the top.”

“So extra,” Carey countered, but pointed out that average viewers didn’t realize that she grew up poor. “And I think that’s really important for people to remember,” Markle continued. “That there might be this persona, and yes the diva thing we can play into — I mean, it’s not something that I can connect to, but for you, that’s been such a big part of —”

“You give us diva moments sometimes, Meghan,” Carey interrupted, laughing. “Don’t act — don’t act like you…”

Markle first began to protest, but Carey clarified. “It’s also the visual. A lot is the visual. Let’s pretend that you weren’t so beautiful and didn’t have the whole thing, and didn’t often have gorgeous ensembles. You wouldn’t get maybe as much diva. I’m like, ‘I don’t care,’ when I can, I’m gonna give you diva.”

In a voiceover after the interview, Markle explained how she was feeling in that moment.

“So, my fangirling was tempered today, but I can kind of think she could tell. That aside, it was all going swimmingly until that moment happened [that] stopped me in my tracks when she called me a diva,” she explained. “You could see me obviously, but I started to sweat a little bit, I started squirming in my chair in this quiet revolt … my mind was genuinely just spinning what nonsense she must have read or clicked on to make her say that. I just kept wondering in that moment, was my girl crush coming to a quick demise? Does she actually not see me?”

“So, she must have felt my nervous laughter, and she jumped right in to make sure I was crystal clear that when she said diva, she was talking about the way I dress, the posture, the clothing,” Markle continued. “The quote-unquote fabulousness, as she sees it. She meant diva as a compliment, but I heard it as a dig. I heard it as the word diva, as I think of it. But in that moment as she explained to me, she meant it as chic, as aspirational, and how one very charged word can mean something for each of us.”

Markle added that by reclaiming these type of words, it’s also what helps propel us to move forward, and that it’s something she plans to explore as she continues her podcast. In either case, we welcome the insight, and not just because she’s already had the pleasure of dethroning Joe Rogan into second place.