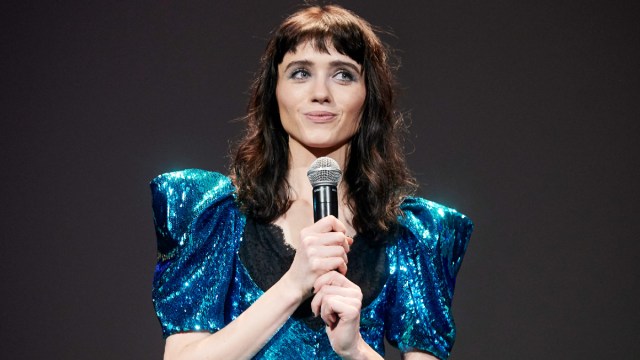 Stranger Things fans best know Natalia Dyer as Nancy Wheeler, the bubbly yet determined older sister of Mike Wheeler. But on Monday morning, the 27-year-old actress began trending for a reason unrelated to her hit Netflix series — after a cosmetic beauty nurse practitioner on TikTok attempted to give some pointers on how Dyer could improve her face with injections and fillers.

Yes, that Natalia Dyer — the veritable porcelain doll of a human being who obviously needs no help in the beauty department. And yet, the following TikTok video went viral after Twitter user @probablypersian tweeted it out on Sunday evening.

“I could never be a celebrity because if someone made a video like this about me I would get violent,” they tweeted, along with the clip.

The woman in the video is Miranda Wilson, N.P., who works out of a Laguna Beach-based skincare practice. Among her various suggestions is that Dyer treat the masseter muscles that are attributed to her unique jawline, add filler to her chin and lips, and botox to give her a brow lift. The audacity, in a word, is astounding — and the finished product, which Wilson helpfully demonstrated with some Photoshop work, barely even resembled the actress.

The video seems to have since been deleted after it went viral, but a couple of Wilson’s other videos tell on herself.

Namely, one TikTok suggests that money really can buy happiness with a side-by-side of Khloé Kardashian’s cosmetic transformation. In another, she reveals before and after photos of her own apparent glow up — unveiling a “before” face shape not completely unlike Dyer’s.

However, as the video with suggestions for Dyer, in particular, went viral, plenty of fans piled on to defend the actress while generally deriding toxic beauty culture.

“One thing they taught young me in advertising (before I left it) is that our job was to destroy self esteem,” tweeted radio host Rafael Shimunov. “By targeting someone people hold as extremely beautiful, they are targeting your self esteem more than they are Natalia Dyer.”

Another user correctly pointed out that uniqueness is a huge factor in beauty, and particularly when it comes to Dyer’s features.

One user went so far as to suggest that Dyer should “beat her ass.”

Plenty of others pointed out that the cosmetic beauty industry just seems to want all women to look generic and identical.

If Dyer is somehow aware of the controversy surrounding her face, at the very least, hopefully, she gets a laugh out of the whole thing. Wilson, on the other hand, probably not so much!