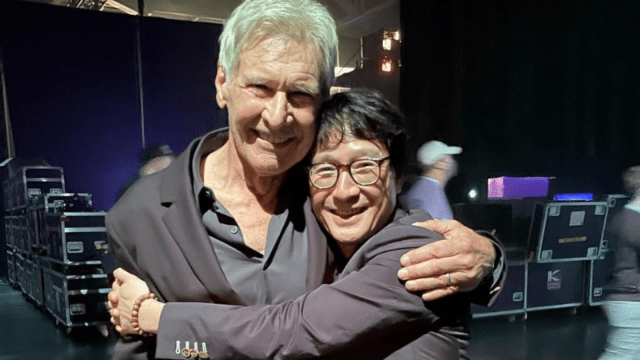 Indiana Jones stars Harrison Ford and Ke Huy Quan had a touching reunion at D23 last month, as evidenced by the Short Round actor’s Instagram post, captioned simply, and affectionately – ‘I love you, Indy’.

But what may be even sweeter than that is Quan’s story behind the photo and his thought process ahead of the reunion.

Quan recounted the events of the meeting to New York Times writer Kyle Buchanan. He recalled his heart racing and wondering whether Ford would even know who he was.

“And as I get closer, he turns and points his finger at me, and he has that classic, famous, grumpy Harrison Ford look. I go, “Oh my gosh, he probably thinks I’m a fan and he’s gonna tell me not to come near him. But he looks and points at me and says, “Are you Short Round?” Immediately, I was transported back to 1984, when I was a little kid, and I said “Yes Indy.” And he said, “Come here,” and gave me a big hug.”

After capturing the hearts of audiences in the 80s with his roles in Indiana Jones and the Temple of Doom and Goonies, Ke Huy Quan took a three-decade-long hiatus from acting before returning to the screen with Everything Everywhere All at Once.

Given that long period away from the limelight, we can absolutely empathize with Quan’s nerves before reuniting with his onscreen mentor.

It appears to be the season for lovely, heartwarming reunions – with Back to the Future’s Michael J Fox and Christopher Lloyd sharing a touching hug at New York Comic Con earlier this month.

Of course, the entire reason Harrison Ford was even at D23, to begin with, was to promote Indiana Jones 5, scheduled for release on June 30, 2023.