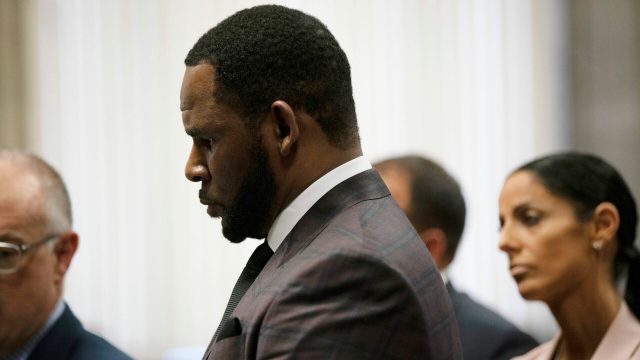 CHICAGO, IL - JUNE 26: R&B singer R. Kelly appears at a hearing before Judge Lawrence Flood at Leighton Criminal Court Building June 26, 2019 in Chicago, Illinois. Prosecutors turned over to Kelly's defense team a DVD that alleges to show Kelly having sex with an underage girl in the 1990s. Kelly has been charged with mulitiple sex crimes involving four women, three of whom were underage at the time of the alleged encounters. (Photo by E. Jason Wambsgans-Pool/Getty Images)

R. Kelly received his prison sentence for charges of sex trafficking and federal racketeering in a courtroom on Wednesday morning. Kelly, whose real name is Robert Sylvester Kelly, was handed a 30-year sentence after being convicted in 2021 for the abovementioned charges.

District Court Judge Ann Donnelly told Kelly, “You left in your wake a trail of broken lives,” as she handed down the sentence to a, as CNN reports, very stoic Kelly. The judge also mentioned the childhood abuse he experienced but did not refer to it as an excuse — especially where his victims and their loved ones are concerned.

“It may explain, at least in part, what led to your behavior. It most surely is not an excuse.”

The five-week trial took place in Brooklyn and told of the way Kelly exploited boys, girls, and young women by using his social standing and status to prey on victims. What’s even harder to come to terms with is that Kelly was accused of using a “network of people” to carry out his crimes — signaling that people were aware of his injustices and did nothing.

Kelly didn’t wish to address the court but instead echoed his attorney Jennifer Bonjean’s statement that he wouldn’t be speaking during the sentencing.

Bonjean said that Kelly “accepts that he is a flawed individual” but isn’t a “one-dimensional monster,” as they accuse the public of labeling him.

In addition to the sentencing, CNN shares that some of Kelly’s victims had the opportunity to address their abuser and share their statements in a court of law. Standing up for themselves and having the ability to use their own voice after having so much taken from them at the hands of Kelly was a step forward in the healing journey.