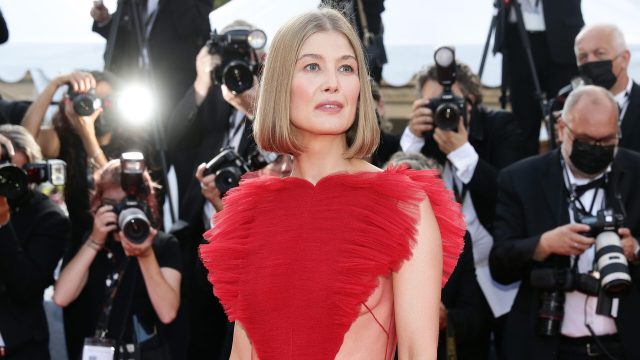 The death of Queen Elizabeth II has ignited discussions everywhere around whether the magnitude of the funeral ceremonies is justified. The latest contributor, to the dismay of many, has been British actress Rosamund Pike, who took to her Instagram profile to share a video where she sings the monarchy’s praises for five minutes.

Dressed accordingly, in an all-black ensemble, in the video, Pike talks about how she took her children out of school, so she could make them watch the funeral live stream, and then goes on to emotionally break down her and her two boys’ favorite aspects of the ceremony and eulogize the Queen.

Despite Pike’s incredibly eloquent speech, the internet is not too impressed with its content, where she raves about how proud she is of her cultural tradition and heritage. Her opinion is being scrutinized due to Britain’s history of imperialism and colonialism, which have served as pillars for the riches of its royal family.

In true Twitter fashion, Pike quickly became the latest addition to the infinite monarchy-adjacent colorful commentary that has taken over the platform since Queen Elizabeth’s passing.

Some brought up Pike’s posh upbringing, which, they say, has never been more evident than in her recent royalist tribute. The Gone Girl actress, who was born in Hammersmith, London, attended Badminton Boarding School in Bristol and the University of Oxford.

For others, the video proved to be a little too excessive for their taste and resulted in them unfollowing Pike’s Instagram account.

The funniest part of the video seems to be the ending, where Pike simply stares at the camera and repeats the phrase “My thoughts” deeply and sentimentally. The internet is not letting this one go so soon.