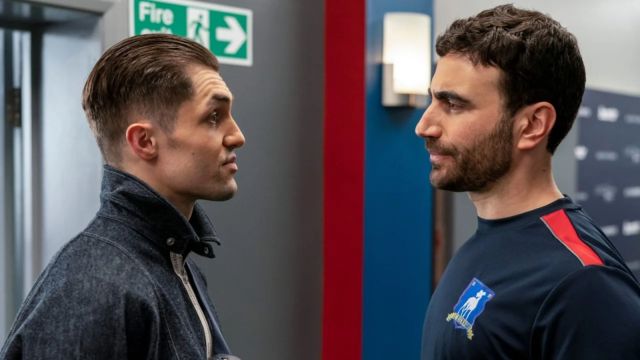 Ted Lasso saw plaudits aplenty at the 2022 Emmys, but one of the night’s best moments saw two of its stars Phil Dunster and award-winner Brett Goldstein get all cuddly.

Goldstein and Lasso continued their respective hot streaks at the Emmys, with the Roy Kent actor winning the Outstanding Supporting Actor in a Comedy Series category during Monday night’s festivities. His plus one for the awards show was none other than his co-star, and often on-screen rival, Dunster, who plays Jamie Tartt.

Tartt is the exact opposite of Kent: he’s a flash, Jack Grealish-esque footballer with a love for theatrics. At odds with each other for most of the series, it clearly cannot be further from reality with their actors.

Fans are thoroughly enjoying the two’s bromance off-screen, with comments flying in thick and fast shipping the duo: stoked by Dunster’s caption which read “[T]hank you for having me as your date @mrbrettgoldstein. You’re fit and clever.”. A lovely duo for the ages.

The duo will play a big part in Ted Lasso’s third and final season, which is not expected to release until at least late 2023. The series has had great success at the Emmys since it first aired, winning seven awards and receiving 40 nominations.

Ted Lasso is available to stream on Apple TV Plus.