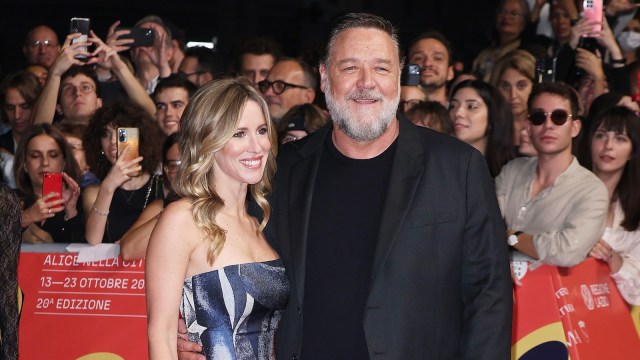 Thor: Love and Thunder actor Russell Crowe made his first walk down the red carpet with his girlfriend Britney Theriot at the Rome, Italy premiere of his new film, Poker Face Sunday evening. The appearance marks the pair’s red carpet debut after they were first spotted kissing during a round of tennis in 2020.

Crowe, 58 seemed cozy with Theriot, 31, slipping his arm around her several times as the flashbulbs popped. The pair refrained from any other PDA, however. Theriot sported a wavy hairstyle that complimented a blue and purple dress in an array of geometric patterns while Crowe opted for a restrained dark grey suit and midnight blue crew neck sweater. As usual, sported a full beard — which is a bit more salt than pepper these days.

Theriot is Crowe’s first significant other following his public — and messy — divorce from singer/songwriter Danielle Spencer in 2018. The former couple had been separated since 2012. The Gladiator star later sold off a massive lot of his personal property — including everything from art to underwear — in an auction, he dubbed “The Art of Divorce.” He would later state that “In case anyone is interested . . . $3.7 at the coal face and around $350k of conversations ongoing . . . and a bunch of stuff I didn’t really want to sell coming home,” he joked on Twitter on Saturday night. “Not a bad hourly rate for a 5-hour shift,” according to US Weekly.

Poker Face is Crowe’s second feature film as a director. He will also star in the film as Jake, a master game player/planner who gathers his childhood friends to his estate to come to a reckoning with them only to have his plans run awry when the estate is invaded by a sinister criminal figure.