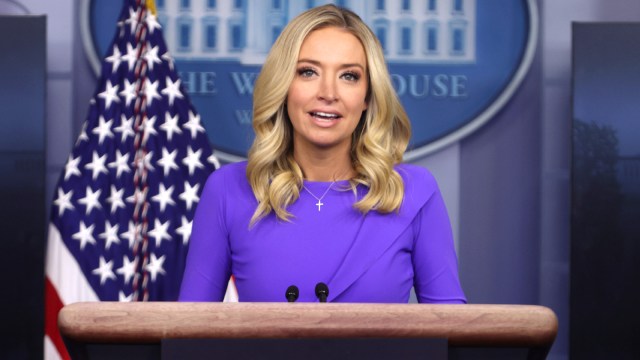 Stephen King may be widely known as the master of horror, but on Friday morning, the prolific author horrified his fans for a, shall we say, less seasonal reason.

In addition to his ever-growing bibliography, the 75-year-old is also very active on Twitter, where he often shares his political views. But his apparent criticism of former White House press secretary Kayleigh McEnany, who served at the tail end of the Trump administration, did not sit well with many of his followers.

Now, to be fair, McEnany told no shortage of mistruths while serving under her former boss, and to call her out on her actions is one thing. But to reduce a woman to her looks in 2022 is quite reductive, as King did when he literally compared her to a “Barbie doll.”

“It’s amazing how much Kayleigh McEnany looks like a Barbie doll,” King tweeted just before 8 am, breaking the apparent rule of “no tweeting until you’ve had your coffee.”

However, after getting some pushback, King clarified his thoughts in a followup tweet. “Not trying to be sexist or mean; it’s just that the resemblance is remarkable,” he wrote. “Possibly it’s the makeup.”

It’s unclear why McEnany, who currently serves as an on-air contributor for Fox News, was even on King’s mind — unless we can presume that she lives there rent-free. Perhaps he’s modeling a villain after her in a future novel?

At any rate, while many fans cheered King on, a handful jumped into his mentions to remind him why it’s best to stick to substance while apparently criticizing your political adversaries.

“Whenever you’re talking about a woman you disagree with politically and you choose to focus on her appearance (instead of her politics) you’re definitely bring sexist,” one user reminded him, and several others echoed the sentiment.

“I’ve got to agree with a lot of the comments, Mr. King,” added another fan. “It does no one good to negatively comment on someone’s appearance and, when it’s someone whose politics you disagree with, it brings you down to the level of name calling and weakens your position in a debate.”

In short, next time King wants to tweet about the 34-year-old conservative commentator, maybe he should stick to all of the times she lied for her former boss about the COVID-19 pandemic, election results, or defending that time Trump gassed and beat peaceful protesters so he could stage a photo op in front of St. John’s Episcopal Church. There’s a lot to choose from!

In the meantime, if it’s Barbie he’s interested in, the Margot Robbie-led movie opens on July 21, 2023. But truth be told, he seems like more of an Oppenheimer guy to us.