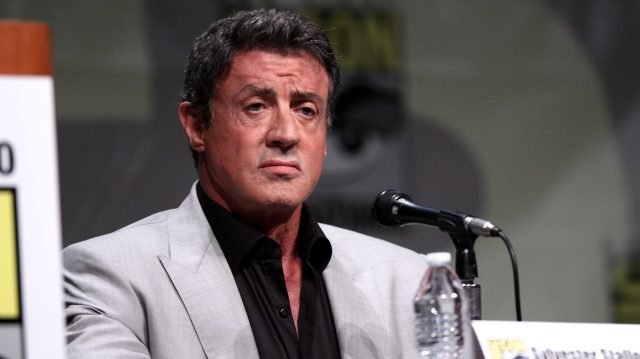 Sly Stallone is not pulling his punches at the people who hold Rocky‘s rights.

Fresh off the announcement of a Rocky spinoff called Drago, which will be based around Ivan Drago, Rocky’s antagonist from the fourth installment, Stallone charged the Instagram ring to fight what might, at first glance, seem like unlikely opponents: 91-year-old producer Irwin Winkler and his family. However, Winkler and his kin own the rights to Rocky, despite Stallone creating and leading the franchise. After seeing how they’ve exploited his characters, Stallone wants to take the rights back — as he announced in dramatic fashion:

“After IRWIN WINKLER And FAMILY SUCK ROCKY DRY ! Presumed to be the most hated , untalented , decrepited [sic], Producer in Hollywood and his cowardly children have found their next meal… Drago , RETURN MY RIGHTS BLOODSUCKERS ! Throughout history so many artists in every industry ,recording , painting writing , you name it have been destroyed by these blood suckers Who have destroyed so many families , lining their pockets with other people! DOLPH , why? Not a phone call? #parasite producers #exploited artists victims”

He included in the post a photo of Winkler with vampire fangs feasting on Rocky’s neck and another with Winkler and what we presume are his sons stabbing Rocky in the back. (“RETURN MY RIGHTS BLOODSUCKERS!” and the part about Drago’s actor Dolph Lundgren have since been edited out of the post).

“Another Heartbreaker… Just found this out…ONCE AGAIN , this PATHETIC 94 year old PRODUCER and HIS MORONIC USELESS VULTURE CHILDREN, Charles And David , are once again picking clean THE BONES of another wonderful character I created without even telling me … I APOLOGIZE to the FANS , I never wanted ROCKY characters to be exploited by these parasites… By the way, I have nothing but respect for my true friend , Dolph Lundgren.”

We’ll probably read many more rants from Stallone as both Creed III and Drago roll through production, the former of which has a March 2023 release date, while the latter’s has yet to be determined.