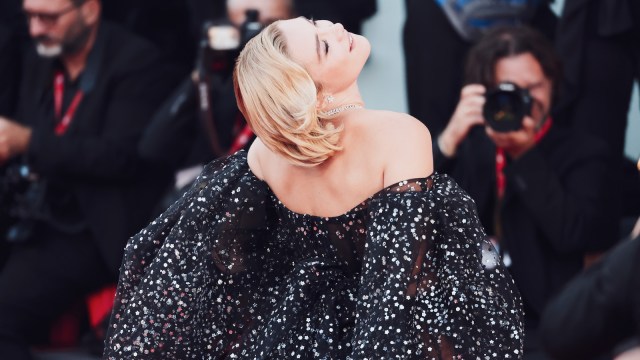 Film’s greatest stars took to the Venice International Film Festival red carpet over the past week to celebrate some of the year’s most anticipated movie premieres in what is one of the biggest and most historic film festivals on the planet, and all the stars came dressed accordingly.

With arguably the most beautiful city on Earth as the backdrop, the Venice International Film Festival has been the stage to some of the most glamorous celebrity fashion moments across the years, and its 79th edition did not disappoint. Let’s look at some of the most memorable looks at this year’s red carpet.

After her breakout role in Netflix’s crown jewel Stranger Things, Sadie Sink has been paving her way as one of Hollywood’s most promising talents of the new generation. In what is probably her highest profile project to date, she stars as Ellie, Brendan Fraser’s teenage daughter, in Darren Aronofsky’s The Whale.

Sink appeared ethereal in this Alexander McQueen gown with a subtly beautiful icy blue tulle long skirt, which flowed perfectly from a metallic, cut-out top, adorned with a pattern reminiscent of snow flakes. The 20-year-old actress’s enviable ginger locks were minimally styled to give the look a stunning mermaid-like finish.

Timothée Chalamet, Bones and All premiere in Haider Ackermann

Timothée Chalamet loves a Haider Ackermann moment. The star and the French designer have been close friends and style collaborators for a significant chunk of Chalamet’s career, producing some of his most unforgettable looks, like last year’s Venice red carpet for Denis Villeneuve’s Dune. Although this striking crimson number split opinion, it’s undeniable that the Bones and All actor makes it work.

In Venice to promote his second Luca Guadagnino movie after his career-catapulting Call Me By Your Name, Chalamet proved once again he is one of fashion’s current most daring and sexiest stars. The actor is no stranger to showing off skin on the red carpet, as his latest Oscars look showed, and we’re thankful for it. He completed the lustrous halter jumpsuit with black kitten-heeled boots, also by Ackermann, and Cartier rings.

Ana de Armas looked graceful in this baby pink custom Louis Vuitton gown, whose plunging neckline and accordion-pleated style allude to her Blonde counterpart’s most iconic fashion moment – Marilyn Monroe’s white dress from The Seven Year Itch, which was immortalized when it danced in the wind from a subway crater, seems to have been the inspiration behind de Armas’ look. The outfit’s pink hue and complimentary impressive “Firebird” diamond necklace by Messika could also be hinting at Monroe’s showstopping “Diamonds are a Girl’s Best Friend” performance in Gentlemen Prefer Blondes.

Blonde, which is an adaptation of the fictionalized novel of the same name, made headlines when it was given a NC-17 rating, which de Armas has called incomprehensible. It received the longest standing ovation at Venice, lasting 14 minutes and moving the leading lady to tears.

There’s a reason Vogue called Tessa Thompson “Venice Film Festival’s Best Dressed Star”. The 38-year-old actress was a jury member at the festival and so was in attendance at most of its events, giving her plenty of opportunities for fashion statements. From a bold Elie Saab red piece, to an all-neon green moment in Christopher John Rogers, Thompson was all hits and no misses for the duration of the festival. She was styled by the duo Wayman + Micah, who were also responsible for the looks of another fashion-forward actress on this list.

This black netted outfit by Interior that Thompson wore to the Blonde premiere was a possible choice among many for her best look. The transparency made this number look particularly flattering, with the platform stilettos and the angular hairstyle topping it off with a modernistic alien look that only the Westworld actress could pull off.

Phoebe Waller-Bridge, The Banshees Of Inisherin premiere in Galvan

The silvery striped see-through bodysuit was a cheeky touch to an otherwise conservative, but elegant, ensemble.

Harry Styles isn’t particularly surprising in his fashion choices, and everyone could have predicted he would have shown up in Gucci, more specifically the Ha Ha Ha Collection, which he designed in collaboration with the high-fashion brand. The British actor — who attended the festival to promote the thriller Don’t Worry Darling in which he stars alongside Florence Pugh — always serves charm and sophistication, though, and this look was not the exception.

Styled by Harry Lambert, this well-fitted padded-shoulder classic navy suit is given a twist by the oversized collar of Styles’ pastel blue shirt. The orange-lens sunglasses, white boots, signature rings, and painted nails complete the actor-singer’s trademark ’70s aesthetic. Styles also wore his Gucci collection to his film’s press conference photocall and as airport fashion as he touched down in Venice – perhaps his most stylish moment at the festival, where he donned a gorgeous fuchsia waist-cinched blazer over a patterned vest and ripped jeans and carried three statement leopard-print Gucci bags.

Maude Apatow, Bones and All premiere in Armani

You simply can’t go wrong with a strapless classic black dress. Maude Apatow’s whole look was reminiscent of old Hollywood glamour, including her beautiful red lips and side-parted wavy hair. She rounded off the ensemble with a gorgeous Cartier necklace.

Apatow attended the premiere of Bones and All with her on-screen sister Sydney Sweeney, who was also wearing a classic Giorgio Armani Privé look. Although conservative, this outfit exudes so much class we can’t help but love it. After all, oftentimes less is more.

Jodie Turner-Smith is the definition of jaw-dropping in this custom Gucci gown and gemstone, white gold, and diamond Gucci High Jewerly. The color combination of black, red, and green were inspired by the pan-African flag, according to Turner-Smith, who told Vogue the dress was “a perfect statement about my pride in the African diaspora.”

This textured look combines chiffon, silk organza, and a velvety hem for a dynamic and grandiose combination. Like Tessa Thompson, the actress is also styled by Wayman + Micah and brought her fair share of show-stoppers to the Venice festival. The two were arguably the most memorable fashionistas walking the Italian red carpet over the past two weeks.

Unfortunately, Florence Pugh wasn’t exactly being talked about for her performance in Don’t Worry Darling or for this stunning red carpet look, but there’s no doubt the young star deserves a spot on this list of best dressed.

Wearing Valentino Fall 2022 Couture and styled by Rebecca Corbin-Murray, Pugh literally sparkled at the premiere of her movie in Venice in this black tulle dress. The actress frequently combines classy shapes with irreverent details, like her septum piercing and feathery heels here. The puffy sleeves, long tail and front slit make this one of the most eye-catching numbers of the week. She also went for the Old Hollywood side-parted wavy hairstyle as she walked the red carpet with her Granny Pat.

When in Italy, go for Dolce & Gabbana. Looking straight out of an Italian movie from the 50s, Pearl actress Mia Goth rocked this Dolce & Gabbana Alta Moda Fall 2022 Couture black widow look. The outfit paired a tight pencil dress with a black corset, which stylist Ryan Hastings then complimented with a dramatic headscarf, sheer gloves and Dolce & Gabbana butterfly sunglasses.

Goth attended the Venice International Film Festival for the press conference and premiere of Pearl, the Ti West-directed prequel to the cult-favorite X which premiered earlier this month. She also wore Dolce & Gabbana to the premiere red carpet, this time a velvety floor-length piece, for a perfect Gothic Venice aesthetic.

Film festivals are obviously not exactly about fashion, but they have become some of the most stylish places for stars to show off their individual styles. In Venice, much like Cannes, there’s just that added romantic artistic feeling of the European cities that inevitably inspires the celebrities attending these very exclusive events.