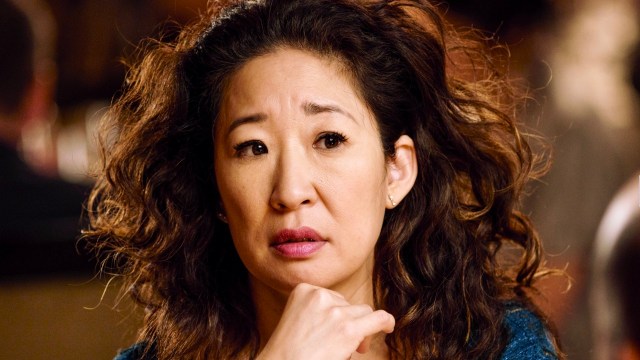 Sandra Oh is an accomplished actress whose bright acting career has spanned over two decades. You might have seen the Canadian-American in several shows or films: Arliss, Grey’s Anatomy, Killing Eve, Shitty Boyfriends, Under The Tuscan Sun and many more. You might have even heard her distinct voice in various animations as the 51 year old has taken on various voice roles like Ting Ting in Mulan, Virana in Raya and The Last Dragon, Gal 2000 in Quantum Quest: A Cassini Space Odyssey, Katie in American Dad and several others.

From a young age, Oh already featured in class musicals and had a strong resolve to act. As a teen, she rejected a four-year journalism scholarship to Carleton University to study drama at the National Theatre School of Canada. It was a gamble, as she went against her parents’ wishes. It was, however, one that massively paid off. Her first significant role came in Double Happiness where she played Jade Li, an actress struggling to assert her independence from the expectations of her Chinese-Canadian family. From there on, she’s starred in countless other movies and shows.

Narrowing down 10 of her best roles is a tall order, but we’ve managed to make a list of Oh’s best television shows and films, ranked from least to best.

One of her lighter roles, The Chair succeeded in showing off Oh’s playful and romantic side as Professor Ji-Yoon Kim, the first woman appointed as the chair of her university’s English department. While fans were displeased that the limited series ran for only six episodes, Oh was hailed for delivering a very believable character, and the series was praised for its depiction of a female Asian lead free of stereotypical characterizations.

In this Canadian apocalyptic black comedy-drama, Oh plays the role of Sandra, the film’s female protagonist who is stranded with Patrik, a stranger who she unexpectedly meets and eventually falls in love with. After its release in 1998, Last Night was met with positive reviews, and Oh’s performance in particular was lauded. The movie went on to win awards at the Cannes and Toronto International Film Festivals and three Genie Awards, including Best Actress for Oh.

One of her more obscure works but arguably one of the best, Oh plays Audrey in this 2002 short film written and directed by Grace Lee. Audrey is a researcher who conducted a study on female condoms. In the course of her work, she discovers that Serena, one of her subjects, is romantically involved with her ex-fiancé. Torn between professional integrity and curiosity, Audrey attempts to learn more about Serena’s life without compromising her work.

Blindness is a 2008 English-language thriller. The film, which is an adaptation of the 1995 novel of the same name, follows a society that suffers an epidemic of blindness. The film was written by Canadian filmmaker Don McKellar and directed by Fernando Meirelles. Here, Oh plays the minister of health in a collapsed society whose people have been reduced to an aimless, zombie-like struggle to survive after being plagued by a “white sickness.”

Directed by Mina Shum, the same independent Canadian filmmaker who directed Oh’s first major film, Meditation Park is a film that follows the life of Maria, a 60-year-old grandmother who emigrated from Hong Kong to Vancouver several years ago with her husband, Bing. Oh plays Maria and Bing’s daughter, a mother of two who looks to reconcile her parents and her brother after a bad disagreement. Meditation Park questions traditional gender roles and reveals difficulties associated with the immigrant experience.

In this American black comedy film written and directed by Turkish-American filmmaker Onur Tukel, Oh is Veronica Salt, an alcoholic whose husband constantly treats her with disdain. She randomly runs into an old college mate in a party, and in an unexpected turn of events, they get into a nasty fight that lands Veronica in a coma. The 2016 film also features Dylan Baker, Craig Bierko, Alicia Silverstone and many more.

Here, Oh plays Amanda, a Korean immigrant who has an allergic reaction to electronics and electricity. Estranged from her mother, Umma, Amanda lives with her daughter, Chrissy, on a rural farm, keeping bees, selling honey, and raising chickens. When Amanda receives her mothers’ cremated ashes, she is confronted with memories of her abusive childhood. Even though Umma was met with mixed reviews upon release, Oh’s performance was praised along with the film’s themes.

Sideways is a comedy-drama that is widely regarded as one of the best films of the 2000s. The film earned widespread acclaim, and took home the Oscar for Best Adapted Screenplay. The movie follows two friends, Miles and Jack, who go on a wine country road trip to celebrate the latter’s upcoming wedding. Oh stars as Stephanie, one of two women the friends encounter on their trip. When strong feelings begin to develop, the men’s secrets surface.

Sandra Oh plays Cristina Yang in this famous American medical drama television series, arguably her most famous role to date. She was originally introduced as a surgical intern in the Seattle Grace Hospital, but Yang worked her way up to resident physician as the show progressed. However, it’s her relationships with other characters like Meridith Grey, Izzie Stevens, Alex Karev that became a focal point of the show. Oh has earned numerous awards and nominations for her role on the series, including a Golden Globe, Screen Actors Guild Award, and a number of Primetime  Emmy Awards nominations.

Killing Eve is a British spy thriller television series based on the Villanelle novel series by Luke Jennings. It was produced by Sid Gentle Films in the United Kingdom, and it follows Oh’s Eve Polastri, a British intelligence investigator tasked with capturing psychopathic assassin Villanelle. Oh has received several plaudits for her role in this thriller, winning Golden Globe Award for Best Actress in a Television Series—Musical or Drama, a nomination at the Primetime Emmy Award for Outstanding Lead Actress in a Drama Series, and a win at Critics’ Choice Television Awards for Best Actress in a Drama Series.