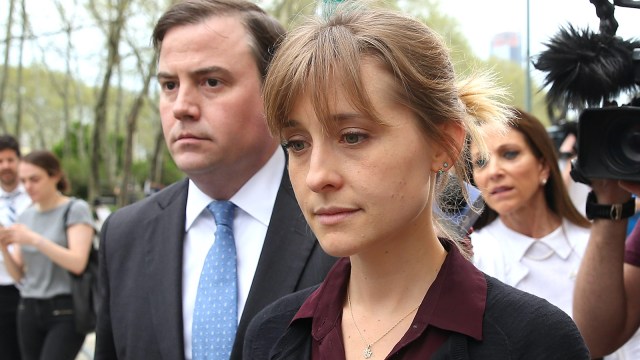 Allison Mack made her debut as Chloe Sullivan in 2001 on the CW hit show Smallville, starring as Clark Kent’s best friend before his days as the Man of Steel. She remained a regular throughout the show’s 10 seasons, slowly making herself a household name. Yet unbeknownst to her co-stars and the viewers watching from home, Mack was also making a name for herself as a “master” of “slaves” in the NXIVM sex cult.

Mack was not the first Hollywood celebrity to find herself entangled in NXIVM’s web of deceit, nor was she the last. In fact, she was just one of several Smallville actors enamored by NXIVM’s promise of a better life. Among them included Callum Blue who played General Zod, Nicki Clyne who played a waitress in season five and starred in Battlestar Galactica, and Kristin Kreuk, who played Lana Lang. Kreuk reportedly introduced Mack to NXIVM shortly after joining in 2006, according to The Hollywood Reporter. However, in 2018 following the New York Times’ exposé and news of NXIVM’s disturbing practices, Kreuk expressed regret and embarrassment for ever having been associated with the group, according to the New York Post.

As Mack’s involvement with NXIVM slowly reached the public, it became clear that this wholesome Hollywood starlet was not an innocent bystander; on the contrary, she served as the right hand to the cult’s leader, Keith Raniere.

Inside NXIVM and Allison Mack’s involvement with it

Founded in the 1990s by Keith Raniere and Nancy Salzman, NXIVM presented itself to the world as a self-help group dedicated to helping people become the best versions of themselves. In reality, the group’s real purpose was to engage in a number of illegal activities including sex trafficking, forced labor, money laundering, wire fraud, racketeering, and identity theft.

At the center of it all was Keith Raniere, the so-called “Vanguard” of NXIVM. Raniere was a convicted felon and well-known con artist who had been involved in a number of pyramid schemes prior to NXIVM. Despite his shady past, Raniere was able to amass a devoted following of mostly wealthy women who were eager to please him.

One of these women was Allison Mack who went on to occupy the “second-most-senior position” to Raniere as “master”, according to The Hollywood Reporter. Mack first met Raniere in 2006 at one of NXIVM’s “Executive Success Programs”, per the New York Times. The program promised to teach its participants how to be successful in business and in life through a series of seminars and one-on-one coaching sessions. Mack was immediately drawn to Raniere and soon became one of his most loyal followers.

Mack helped Raniere create a new secret society within NXIVM called DOS, short for “Dominant Over Submissive”. DOS was essentially a women-only master-slave club in which the slaves were required to hand over damaging collateral, like nude photos or embarrassing secrets, as proof of their devotion and submission. As slaves, they “were held down by other slaves and branded with a hot cauterizing pen”, per The Hollywood Reporter. The brand was of Raniere’s initials and was Mack’s idea.

Later, Mack would go on to give evidence against Raniere in court, keeping her identity private until after the fact. Such evidence included tape recorded sessions of her and Raniere brainstorming how best to proceed with the branding rituals, per Yahoo!. “Do you think the person who’s being branded should be completely nude and sort of held to the table like a, sort of almost like a sacrifice?” he asked Mack in one recording.

“And the person should ask to be branded,” he continued. “Should say, please brand me it would be an honor, or something like that. An honor I want to wear for the rest of my life, I don’t know… And they should probably say that before they’re held down, so it doesn’t seem like they are being coerced.”

Over time Mack quickly rose through the ranks of DOS, becoming one of Raniere’s top lieutenants. She was responsible for recruiting new members into the group and for keeping existing members in line. In order to keep the slaves from leaving, Mack instituted a system of punishments and rewards, including but not limited to calorie restriction and responding to extensive physical demands. According to the New York Times, if a slave displeased Raniere or Mack, she would be forced to wear fake cow udders over her breasts or put on a pair of uncomfortable “Vulcan” nipple clamps for days at a time and called derogatory names. On the other hand, if a slave was deemed to be particularly loyal or helpful, she would be rewarded with Raniere’s attention and approval.

According to the F.B.I., Mack was Raniere’s slave. As detailed in the New York Times exposé, she entered into a contract that, if broken, would result in the relinquishment of her home and future children, which would transfer into his name. Additionally, Raniere would send a letter to social services “claiming abuse of her nephews”.

Where is Allison Mack now?

After experiencing delays in her sentencing due to the COVID-19 pandemic, which resulted in a $5 million bail and house arrest, Mack is currently an inmate at the low-security East Bay federal prison, FCI Dublin. She is serving a three-year pre-sentence while awaiting the civil suit that could see her spending up to 20 years in prison, according to ET. FCI Dublin is the same prison in which actresses Lori Loughlin and Felicity Huffman served time for their involvement in the 2019 college admissions scandal.

Initially, Mack pled not guilty to the sex trafficking charges. However, in 2019 she pled guilty to racketeering charges and racketeering conspiracy, saying, “I must take full responsibility for my conduct and that is why I am pleading guilty today,” according to E! News. “I am and will be a better person as a result of this.”

Because Mack “provided substantial assistance to the government”, the prosecution has sought a sentence below the standard 14 to 17.5 years, per Yahoo!. Such evidence included emails, documents, and the recording of her and Raniere discussing and detailing the branding ritual. The trial date for Mack’s civil lawsuit has not yet been set. She and other top members have also been named defendants in another lawsuit regarding conducting illegal experiments on humans and exploiting female recruits.