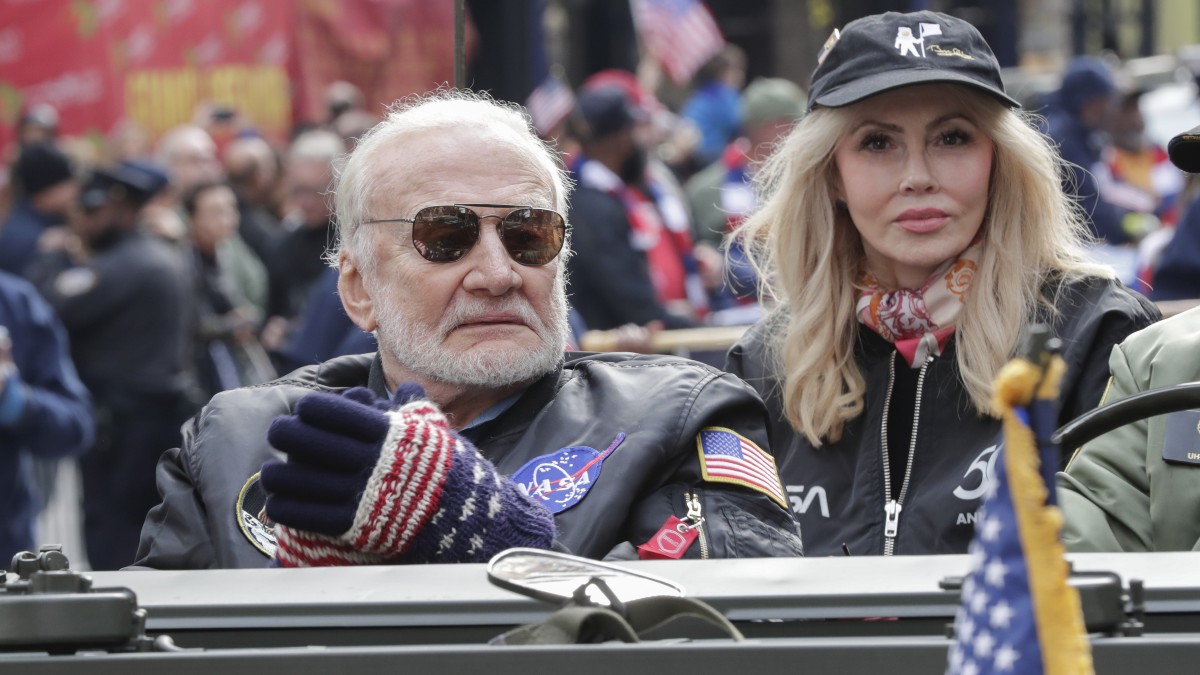 Jan. 20, 2023, was a big day in the Aldrin household. The legendary astronaut celebrated his 93rd birthday, received an honor from the Living Legends of Aviation, and married the love of his life Dr. Anca Faur.

Dr. Buzz Aldrin shared the triple celebration with his 1.5 million followers on Twitter along with photos saying, “On my 93rd birthday & the day I will also be honored by Living Legends of Aviation I am pleased to announce that my longtime love Dr. Anca Faur & I have tied the knot. We were joined in holy matrimony in a small private ceremony in Los Angeles & are as excited as eloping teenagers.”

As best wishes and congratulations flooded in, Aldrin referenced his famous former career.

“It means a lot and I hope to continue serving a greater cause for many more revolutions around the sun!! Onward and upward, and best wishes to all of you as well!”

Buzz Aldrin: To the moon and beyond

One of the only 12 people to walk on the moon, Aldrin is the last living member of the Apollo 11 space mission that first took men to Earth’s satellite. Neil Armstrong famously became the first man to set foot on the moon, with Aldrin behind him, while being watched by an estimated 600 million people back on Earth. The third crew member Michael Collins orbited the satellite in command module Columbia. All three achieved instant fame and were thrust into the public eye in a flurry of famously disconcerting activity for the astronauts. Armstrong passed away in August 2012 and Collins in April 2021.

Before joining NASA, Aldrin had flown fighter planes for the US Air Force during the Korean war and earned a Doctor of Science degree in astronautics from M.I.T.

After his moon landing, media appearances and after-dinner speeches merged with his work at the Aerospace Research Pilot School. In 1998 he founded the non-profit foundation ShareSpace, which promotes science, technology, engineering, arts, and math‍. Twenty years later he established the think tank Human SpaceFlight Institute, which focuses on collaborations to advance spaceflight beyond low Earth orbit.

As for his personal life, Aldrin has been married three times before. Between 1954 and 1974, he was married to Joan Archer, with whom he had three children. He subsequently wed Beverly Van Zile, with their relationship ending in 1978. Aldrin’s third marriage was to Lois Driggs Cannon. The pair were together for 24 years, from 1988 to 2012.

Aldrin’s fourth wife has been spotted out and about with her astronaut beau for the last few years, particularly during the 2019 celebrations marking the 50th anniversary of the Apollo 11 landings.

She attended a dinner commemorating Apollo 11’s return to Earth at the Richard Nixon Presidential Library and Museum in Yorba Linda, California, in July 2019. That year she also attended the American Institute of Aeronautics and Astronautics 70th International Astronautical Congress and the Association of Space Explorers ASE XXXII Planetary Congress.

Born in Romania on May 14, 1959, Faur is 30 years younger than her famous husband. After achieving a Ph.D. in Chemical Engineering and Catalysis from the University of Pittsburgh in 1996, she pursued a career in chemical engineering. She subsequently took positions at prominent chemical companies, including Johnson Matthey and Union Carbide, and is a former California Hydrogen Business Council board member.

Since 2019, Faur has been an Executive Vice President at Buzz Aldrin Ventures LLC.