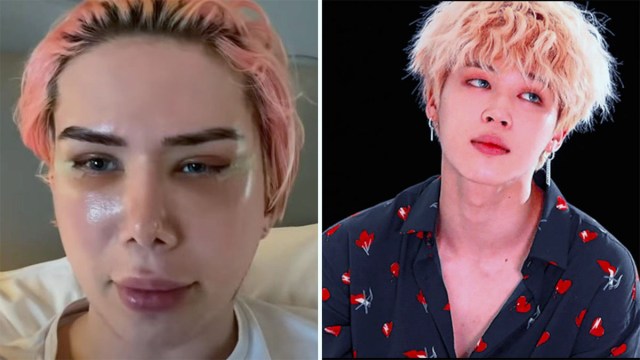 Since BTS’s debut in 2013, the South-Korean boy group has gotten exponentially popular, gathering millions of fans worldwide and selling out the biggest stadiums. With arguably one of the largest fanbases in the world, BTS’ name is oftentimes attached to their passionate fan group, known as ARMY, who are particularly devoted to the seven-member group, but at times, not for the best of reasons.

As with any large celebrity, as their popularity grows, some over-the-top fans are bound to arise. In BTS’ case, the most popular and off-the-wall example just happens to be an online sensation, self-proclaimed ‘transracial’ personality, Oli London.

Who is Oli London?

Oli London is an internet personality from London, England, who became entranced with Korean culture in 2013, after moving to South Korea to teach English. The 32-year-old would eventually become mesmerized with K-pop group BTS, particularly idolizing BTS member Park Jimin. Whilst learning and becoming increasingly engrossed with Korean culture, London started venturing into the world of plastic surgery, aiming to look exactly like Jimin.

As of 2022, London had already spent over $200,000 dollars on over 20 surgeries to look like Jimin. From lip fillers to nose surgeries, the influencer has attempted to change their entire outlook to complete their transformation into the South Korean singer, going as far as to change their eye shape in order to emulate epicanthal folds, or monolids, an eyelid shape usually seen in people of Asian descent. London has also a tattoo on their forehead saying “Jimin”.

Their obsessiveness over Jimin’s looks took an even more extreme turn when the influencer not only married a Jimin cardboard cutout but also informed the world of their pronouns, coming out as non-binary and even using “Korean” as a pronoun, adding that they go by “They/ them” and “Kor/Ean”. From then on, Oli often called themselves “transracial”, affecting not only the non-binary and trans community, but also — naturally — Asian people throughout the globe.

Since then, London has appeared on several talk shows and radio shows and even created their own YouTube channel to document their life and share their music. Wholeheartedly believing they are Jimin’s look-alike, the influencer claims to “look just like” every other K-pop star in existence. In a video shared on YouTube just around a month ago, London also got married to their partner, Danny, 19, who they claim to look just like Jimin. In that same video, London also targetted the South-Korean girl group Blackpink, claiming they “look identical to Rosé” and adding that they “might as well join Blackpink”.

What are they apologizing for?

In their most recent YouTube video, London apologized to Jimin and the Asian community for their past behavior. In the video, they mention their partner and therapy as the sources of their change of heart, explaining their past actions in the process, and addressing the accusations of racism, cultural appropriation, and obsessive behavior.

“For the last few months, I have been undergoing therapy and rehabilitation to try to deal with my unhealthy behavior and addiction to Jimin and plastic surgery,” London said. “Since I recently got married to my husband, who is my very own Jimin (and actually looks like him), I have finally found someone who loves and accepts me for who I am. I have been chasing this acceptance all my life and now that I have found it, it has made me a completely new person.”

Moreover, the actor and singer also mentioned past struggles with body image and self-confidence, admitting to having found solace in Korean culture.

“I just wanted to cut my whole face off and be a different person, someone beautiful and someone with confidence,” he explained. “At age 23, I moved to Korea and lived there for one year, and this changed me completely as a person forever.”

London’s apology to the Asian and Korean communities hasn’t yet been embraced with open arms, especially considering the harmful influence and cultural appropriation inflicted by London, plus, they still identify as Korean. Their actions are also heavily reflected upon K-pop fans, who are often deemed as eccentric as London, and therefore, receive a negative and obsessive label due to the actions of one individual.

Whether or not their apology is meaningful or not, one might assume that their actions are irredeemable at this point, however, only time will tell what, if anything London actually learned from all the money spent on trying to be someone else.