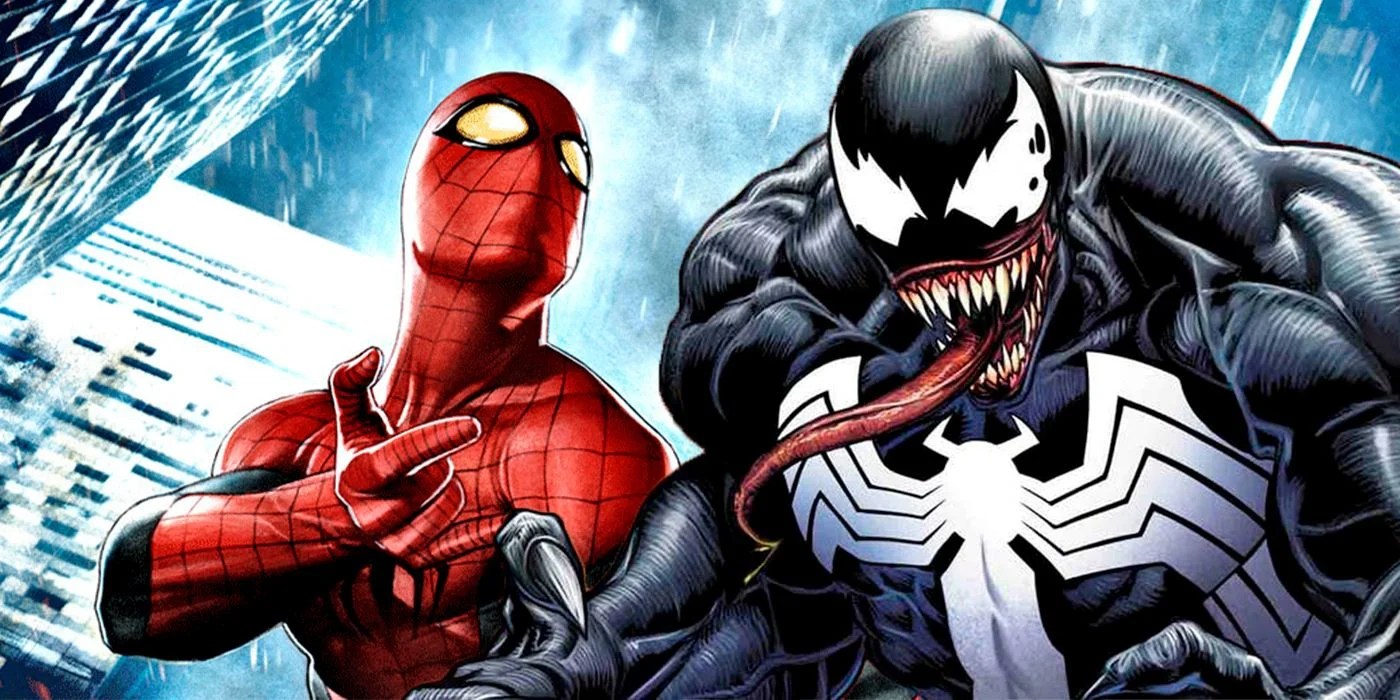 Venom is one of the most powerful foes Spider-Man has ever faced. The two have squared off repeatedly since the symbiote’s arrival more than 30 years ago. Their rivalry is understandable — Venom has closer links to the famous wall-crawler than many other enemies.

Venom was introduced in the closing chapters of the Secret Wars saga in 1984. He improbably spent four or so years as Spidey’s new suit before taking on his now-familiar form and becoming one of Marvel’s top-tier characters. Not many villains began their careers as a costume, but then, he was a stylish and practical one. Black with silver livery, the new suit Spidey picked up on an alien planet repaired itself and gave him impossibly deep pockets to store cameras and other kit while web-swinging. Practical crime-fighting without ruining his outline — but it didn’t last long.

Spidey learned with the help of the Fantastic Four that the suit was an alien symbiote, slowly bonding with him. Spider-Man had to take drastic action, and the symbiote took the split badly. From those humble beginnings, he became a significant threat to Spider-Man, the wider Marvel universe, and a blockbuster headliner in his own right. Assuming the name Venom, this one-time garment remains one of the most compelling characters in the Marvel pantheon.

Introduced as a terrifying villain, the symbiote’s niche morality soon earned him a solid antihero status. He’s joined forces with the Marvel heroes on more than one occasion, even, reluctantly, Spider-Man. But some alliances are weaker than others. All bets are off when it comes to everybody else’s favorite web-slinger. Venom hates Spidey and would happily take him out of the equation, no matter his mood.

The symbiote’s unique link to Spider-Man means their fights are unpredictable and unmissable. Few heroes know each other inside out as well as these two. While Venom’s most vengeful and successful bond has been with Eddie Brock — a journalist with his own grudge against Peter Parker — the symbiote’s enmity for Spider-Man has stretched across several human hosts.

Venom has the advantage of being physically larger and stronger than Spider-Man. He can also, to a degree, shapeshift and camouflage himself. But having once bonded with Spidey, he can also replicate his powers. That bond also means Parker’s spider-sense is useless against Venom, which has encouraged the villain to employ underhand tactics. In The Amazing Spider-Man #388, he tried to push an unsuspecting Parker under a subway train.

There’s no doubt that Venom is a mighty opponent and has inflicted major damage on Spider-Man in the past. He’s an enemy that knows Spidey inside-out and outpowers him on almost every level. But their former symbiotic relationship works both ways, and Spider-Man has employed many methods to defeat Venom.

Separate the symbiote from its host

Venom and Spidey’s smackdown in The Amazing Spider-Man #316 and #317 deservedly stretched over two issues. Dedicated to destroying Spider-Man, the symbiote and new host Eddie Brock stalked the web-slinger for days before luring him into a trap with a savage attack on Black Cat.

Artist and co-creator Todd McFarlane didn’t hold back on the fight that followed as Spider-Man was roundly beaten by Venom at the top of his game. Stripped of his costume and nearly drowned, Parker resorted to a risky strategy: he begged the symbiote to rejoin. The gamble worked. When the symbiote attempted to separate from a confused Brock, the pain knocked them out, and Parker escaped in his underwear.

It sounds silly, but it’s a testament to the danger Venom’s obsession posed to Parker and his family. In The Amazing Spider-Man’ #347, Spidey battled Venom on a remote tropical island — not the ideal environment for a web-swinger. Spider-Man was losing so badly that he had to fake his death by dressing a skeleton in his costume. The unlikely gambit paid off, and Brock and his symbiote were satisfied that they’d achieved their goal in paradise ⏤ until Spider-Man later came calling when he needed Venom’s help, but that’s another story.

The original and best way to deal with a symbiote is with loud noise. That weakness was something Parker learned when he first separated from his suit. Indirectly, that also led to the fearsome form of Venom we all know today.

Spider-Man calculated that the ringing bells of Our Lady of Saints Church would destroy his suit, but not that it would knock him out first. Fortunately, the symbiote felt differently about Parker in those pre-Venom days. The empathic connection between the two led the costume to sacrifice itself by dragging Parker to safety. When it crawled away to die, chance brought it into contact with a broken Eddie Brock, who was praying for forgiveness at the altar below. The coincidental pairing unleashed the Venom we know, but the weakness for noise remained.

Sonic blasts can severely weaken any symbiote, as seen on screen in Spider-Man 3 and Venom. Comic stories have seen Venom deal with noise many times. In Peter David’s Incredible Hulk vs. Venom, the symbiote was defeated by the Hulk’s supercharged clapping. A round of applause, everyone.

This weakness is a real leveler, meaning non-superpowered humans stand a chance against the marauding powerhouse. During the Venom: The Hunted series, the NYPD stopped the symbiote in his tracks with Operation Decibel: the activation of every alarm, air raid siren, and bell in New York City.

Although some symbiote-host bonds have proved more resilient than others, they are all susceptible to intense heat. That said, heat has proven better for buying time than landing a winning blow. During Peter Parker, Spider-Man, the hero scared Venom out of the Daily Bugle offices using a lighter and then improvising a flaming torch with a bunch of newspapers. Despite J. Jonah Jameson’s run-ins with the symbiote, we’re not sure the editor would approve.

The Venom-Brock pairing has become the most popular and inflicted the most damage on Spider-Man. Other symbiotic pairings haven’t proven so successful. The implication is that the greater the hatred shared between symbiote and host, the greater the resulting power and resilience. Spider-Man has beaten some pairings more quickly and easily than others, something the symbiote realizes.

One short-lived host was Angelo Fortunato, a bad guy who bonded with Venom in Marvel Knights Spider-Man #7. Just one issue later, Fortunato’s cowardice after killing an innocent school kid and running from a fight with Spider-Man led the symbiote to abandon him while leaping between buildings. Ouch.

Let him overexert himself

You read that right — we’re into defeats that Venom would rather forget. Venom’s powers may improve on Spider-Man’s in many ways, but even a symbiote can have too much of a good thing. In their first clash, Spider-Man defeated Venom in a spectacularly underwhelming way. In The Amazing Spider-Man #300, Spidey realized that Venom used organic webbing to match him swing for swing. The web-slinger fought him to exhaustion when Venom used so much “webbing” that there wasn’t enough symbiote left to effectively maintain its bond with Eddie Brock. Years of build-up, and Venom couldn’t control his excitement.

Venom is regarded as more of a physical threat than a strategic one. In Spider-Man: Special Edition, Spidey worked with the Vault to trick Venom into a cell by using holograms to make it look like a cave. Not one of Venom’s greatest moments.

If some of the lengths writers have gone to in making sure Spidey triumphs over Venom seem extreme, remember the web-slinger doesn’t always get his way. One of the character’s darkest moments came in 2004’s Venom #11. After pulverizing Spider-Man during a fight in Queens, Venom pauses to relish the moment.

“I live for these moments, Spider-Man. Me… Eddie Brock. Beating you down… Like the weak-kneed little boy that you are… And then leaving you there. Broken, knowing that any time I want… We can come back and do it again.”

It’s no wonder that Dan Slott and Adam Kubert saw the chance to take this to an extreme in a parallel universe. In Amazing Spider-Man: Renew Your Vows #1, Spider-Man was forced to kill Venom to protect his family. Venom has undertaken an incredible journey since he first encountered Spider-Man. But whether the symbiote is joining the Avengers or embarking on cosmic adventures, Spider-Man shouldn’t stop looking over his shoulder.