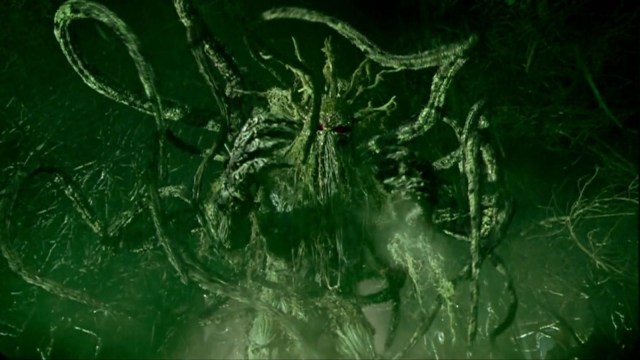 One of the lesser known but respected properties of the pre-MCU era was a small film called Man-Thing. It’s a lesser-known Marvel property that Lionsgate owned, and in the early 2000s, director Brett Leonard was tasked with bringing it to life. However, Leonard shared that another big Marvel property’s lack of success affected his movie in a bad way.

Of course, we’re talking about the 2003 Ang Lee version of Hulk, which wasn’t quite the smash that Marvel was hoping it would be. In an interview with Comicbook, Leonard revealed that he got some troubling notes about his movie, which is now considered a cult classic.

“Hulk was a troubled production, it was troubled from a budgetary standpoint. It also was troubled from its critical and commercial response and that upset the powers that be at Marvel quite a bit. There was a bit of a father-son backstory that we had worked into the Man-Thing origin story but that kind of, in Marvel’s view, mirrored too much what they had, what they thought was not successful as a father-son backstory in the Hulk.”

For the uninitiated, Man-Thing is a movie about a dangerous swamp creature. Here’s the synopsis of the movie via Rotten Tomatoes.

“When a greedy oil baron (Jack Thompson) sets his sights on drilling in a Louisiana swamp, a monstrous creature is awakened. The baron and his associates are killed in the swamp thicket, spurring an investigation led by Sheriff Kyle Williams (Matthew Le Nevez). Although the Seminoles are initially suspected of the murders, the swamp creature, known as Man-Thing (Conan Stevens), is the killer. A gruesome creature made of plants and vines, Man-Thing possesses strange and dangerous powers.”

The writing team of James Coyne and Hans Rodionoff wanted to write a script with emotion, and that included a father-son family aspect to the movie. Everything was going swimmingly until they got a fax from Marvel featuring a rewritten script.

“Then there was a draft that came through to us on the fax machine suddenly one day, after the Hulk had opened and shifted a things because they were responding to concerns they had regarding some of the things that didn’t work in the Hulk. And they were worried that those similar themes wouldn’t work in this.”

The new script completely changed everything about the movie, Leonard said.

“It was totally different in all honesty. It was just, I think, a reaction to the surprise of the Hulk not really working commercially and critically as much as they wanted it to. And they had Ang Lee, who is an Academy Award-winning director, who some thought was a strange match for that material.”

Man-Thing is available on DVD or streamable on Tubi.