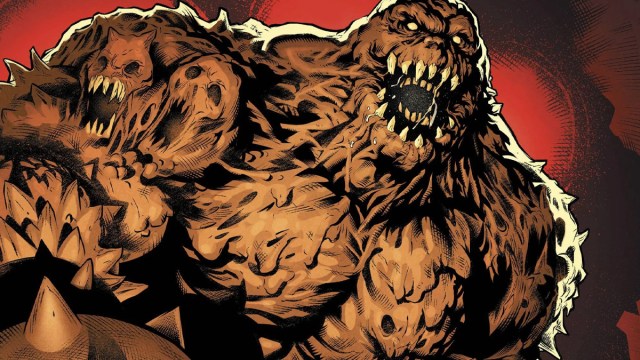 Another Gotham villain with tragic roots and nods to gothic horror, Clayface has undertaken an incredible journey since he first appeared in June 1940. Yes, the man of clay is one of Batman’s original rogues, beating the likes of Penguin, Two-Face, and Riddler to take on the Dark Knight.

Over the years, Clayface has been at the whim of comic book crazes and trends like few others. That’s led to eight versions of the character appearing in the pages of DC Comics over the past 80 years, many adding new abilities to the ultimate Clayface power: shapeshifting. The villain is popularly shown as a mass of sliding and consuming mud-clay, with vague but powerful humanoid limbs backed by super strength. He’s a formidable and recognizable foe who’s tested the security of Arkham Asylum on many occasions. Clayface’s natural state has a huge monstrous head with glowing eyes and a giant mouth full of strangely chipped teeth.

Clayface is undoubtedly one of Batman’s more formidable rogues, with heightened durability and the ability to regenerate his body mass and change shape, size, and density. In Gotham, you need to be careful who you’re talking to; his touch can steal DNA to perfectly duplicate his target and has even been known to melt flesh.

Origin of a malleable villain

The original Clayface was the Universal Studios-inspired Basil Karlo, created by legendary Batman creative duo Bill Finger and Bob Kane for Detective Comics #40 (June 1940). He was a B-list actor driven mad when one of his starring horror roles was being remade without him. Given some cinematic reboots, it’s no wonder the intervening years have increased sympathy for the character. However, his early appearances portrayed him as an outright villain, donning the mask of a character he played in the original Dread Castle, using the mask to kill the actors hired for the remake in the order he killed their characters in the original.

The Silver Age and B-movie science-fiction arrived in Gotham in the 1950s, particularly with the second Clayface, Matt Hagen. Supernatural, radioactive protoplasm granted him shape-shifting powers and superstrength, setting the character’s villainous template for over two decades until he was destroyed during Crisis on Infinite Earths.

By the 1970s, science had caught up with gothic horror in the tragic Preston Payne. Hoping to cure his hyperpituitarism with the second Clayface’s blood, he inevitably transformed into a shapeshifting clay-fiend himself. It was Morbin time: The twist with Clayface III was that Payne could only survive by passing his condition on to others.

Clayfaces of the Modern Age

Later, Sondra Fuller emerged as Lady Clay, gaining shapeshifting powers from terrorist tech. She proved to be a clay mastermind when she formed the Mud Pack super clay team with Basil Karlo and Preston Payne. Karlo declared himself Ultimate Clayface when he injected himself with blood from his successors and gained their powers. Fuller and Payne took the Mud Pack a bit too far when they married and had a son, Cassius, who was Clayface V.

Cassius was the purest Claface yet. He only existed in clay form and possessed a new ability of bio-fission, whereby parts of him could fuse with other humans to create new Clayfaces. That led to the sixth Clayface (or “Claything”) Dr. Peter Malley, who added the horrific new skill of melt-vision.

Todd Russell, the seventh to be given the name, returned the character to his serial-killing roots. Little was revealed about this version before Catwoman stopped him in his tracks.

In recent years, comic creators have recognized the character’s potential as a tragic villain and antihero.

The last “new” version of Clayface in the comics helped rehabilitate the character. In Batman: Gotham Knights #60, Johnny Williams appeared as a Gotham firefighter tragically transformed into the new Clayface by a chemical fire. Manipulated by villains Hush and Riddler, he finally joined forces with Batman to defeat them.

In the comics, you’ll now find Clayface as more of an antihero. He joined the Bat Family during the DC Rebirth reset. In this continuity, the original Clayface, Basil Karlo, was still an ex-actor, but instead of being driven insane by his ambition, he was transformed by an accident leading Batman to give him a second chance.

There have been multiple multiversal and parallel versions of Clayface in the comics, including a Jokerized version brilliantly called Clownface. Fittingly for a veteran Batman villain, the character has also enjoyed strong runs in multimedia adaptations, including animations, video games, web series, and live-action spin-offs. Animated adaptations have been particularly good for Clayface. Feat of Clay is a classic two-parter from early in Batman: The Animated Series. It fused early versions from the comics in Matt Hagen, an actor disfigured in a car accident who was transformed by an experimental chemical, brilliantly voiced by Ron Perlman. In the adult animation Harley Quinn, Alan Tudyk has fun with the theatrical and accident-prone member of Harley’s team. He was transformed by a terrible pottery accident in that darkly humorous continuity.

If DC plans to spin out their villains into solo movies after the record-breaking box office of Joker, Clayface has got to be a front-runner. Matt Reeves’ The Batman proved once and for all that multiple villains could survive and thrive during the Dark Knight’s adventures.

Unlike many of Batman’s rogues, Clayface has powers that are overtly supernatural and classically Silver Age. Alongside his quiet stealth of being able to shapeshift into anyone, played with many times in the comics and as seen in the Gotham series, Clayface can deliver the shapeshifting action set-pieces that Spider-Man’s Sandman failed to deliver in movie theaters. Rumors of maestro Matt Reeves working with horror supremo Mike Flanagan make sense. We’ve met R-rated Joker and serial killer Riddler on the screen, but few characters check all the horror boxes like Clayface. An occasional monster, mad scientist, and morality tale, he’s a villain who can fit any mold.