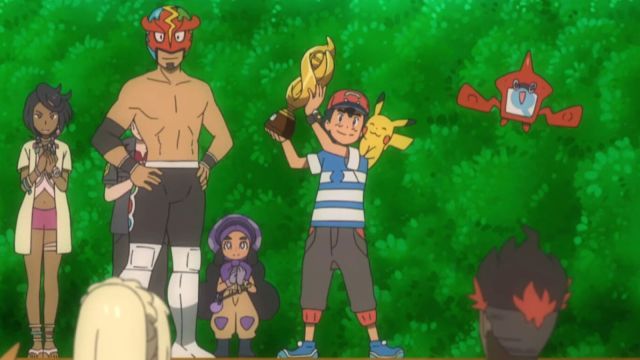 Image via the Pokemon company

The goal to become the Pokémon champion has been the consistent goal throughout the franchise. Training your team to beat the best of each region is something trainers work towards, while also beating evil bad guys on the side. But, with eight mainline games (and a ninth on the way), PokéFans noticed that the title of “Pokémon Champion” in the games isn’t as prestigious compared to the anime.

Over on the r/Pokémon subreddit, user u/billthestamps asked the Poké-munity if they also wished the title of “champion” meant more in-game, noting that pretty much nothing changes except unlocking new areas like the Battle Frontier or the Cerulean Cave in the Gen 1 games.

As someone who played Pokémon for nearly 20 years, I didn’t really notice much change after beating the Elite Four. The closest thing I’ve got for “recognition” was when we were selected to stop a meteor during the post-game story of Pokémon Omega Ruby and Alpha Sapphire, and I’m aware something similar occurred in Pokémon Sword and Shield.

But maybe we the players should be recognized more past the main story, which other fans agree with as well. One commenter pointed out that when you beat the Elite Four in Gen 3, you get a Beldum. This was similar in Gen 4, too, when you received an Eevee after becoming the champion.

Others pointed out that the only time we get recognized in the game was during the main story, when the guy in front of the gym kept calling us “champ in the making”. It’d be nice if people in the streets gave us that recognition, too, at least when walking around or exploring. The closest NPC that does that are the reporters we battle in the Gen 3 games, who interview us when we win.

However, according to some PokéFans, the later titles somewhat recognized you as a champion and gave you opportunities to either defend your title or organize tournaments. Others pointed out that in Gen 5, you were paraded around and celebrated for your victory.

While fans debate about whether we get recognized or not, they shared some ideas to make the champion lifestyle much more interesting than what the games currently offer. Some thought it would be cool if we joined a special organization, or accomplish tasks the previous champion had to do to maintain that title, something infinitely more interesting than just “welcome to the Battle Frontier”.

While it is nice that we are invited to access new areas filled with tough trainers in the post-game, it would be cool if we could do the tasks and obligations other champions did. We see people like Cynthia who are part of the forefront of stopping Team Galactic. Or Leon who can talk to the region’s president. Or like Lance in the anime, who has to deal with the affairs of other regions.

Sadly, the game is limited to what it can do, so maybe having that recognition might be too much for current Nintendo systems. However, with Pokémon Scarlet and Violet promising to be this open-world RPG with multiplayer potential, and newer titles slowly recognizing you as the champ, maybe there is hope for something more in the post-game after all.

But dang, now we know how Ash felt every time he enters a new region.