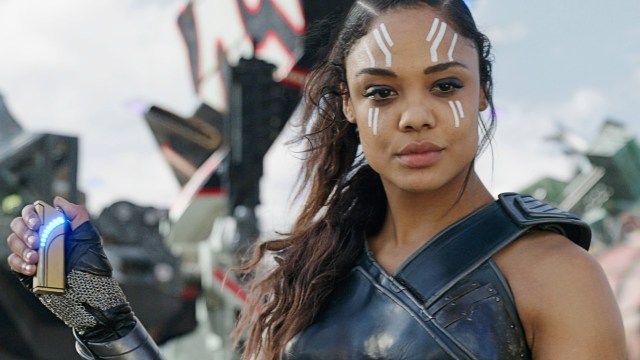 Ever since the trailer for Thor: Love and Thunder, people assumed that Valkyrie would be dating Jane Foster as the Mighty Thor. However, that is not the case, which got fans wondering, will we ever see the King of New Asgard date anyone in the MCU? I mean, her talk with Korg just proved that she’s indeed lonely and wants someone to make her happy.

The MCU introduced viewers to multiple capable characters that are worthy to rule alongside Valkyrie or could bond with her due to similar life experiences. And since it was somewhat confirmed that Valkyrie is bisexual, anyone in the MCU has fair game on who could be Val’s potential love interest.

So here are 5 Marvel characters we could see Valkyrie dating in the MCU.

Agatha gave off strong bisexual vibes in WandaVision, and while she’s a witch trapped in Westview, living the role of Agnes, we still believe that Agatha can still be redeemed. After all, she begged her coven for help and promised to be good if she was taught how to use this power. While it’s unlikely that Val will teach her magic, she can teach her how to be a better person, a superhero even.

Yes, Bucky, The Winter Soldier. There were hints about this 100+ year old’s sexuality in Falcon and the Winter Soldier, even if it hasn’t been confirmed. However, both can share the pain of somewhat breaking their allegiances and the shame of running away, giving up, or working with the wrong crowd. Not to mention, both are skilled fighters, we could see the two as a sword-and-shield pair, where Bucky is the tank while Val is the sword.

Nebula is still learning how to be a team player after the events of Avengers: Endgame. While we saw a glimpse of her in Thor: Love and Thunder, we still don’t know what she’s fully like with the Guardians of the Galaxy. Maybe she and Valkyrie could bond over being out of place in a world filled with mortals and their shared responsibility over them. It doesn’t have to be romantic but there is a possible bond that the two could share over some drinks.

Wong is a wildcard in the MCU. He could be anywhere, anytime, doing random things. One day, he’s the sorcerer supreme, the next he’s on vacation. While people assume Wong may not be interested in a relationship, the cards are still on the table for the librarian to date the King of New Asgard. After all, both have experience keeping the main character grounded when they plan to do something drastic.

Both Xu and Valkyrie are leaders, as Val was a former leader of the Valkyries and Xu is the new leader of the Ten Rings. Xu believed that women should also learn how to fight, not just men, giving the two something in common. While both may have different leadership philosophies, they have similar ideals that the two could bond over. Who knows, maybe the next generation of Valkyries could exist in the MCU with training from both the Ten Rings and Asgardian fighting styles.

In Hawkeye, Yelena had to live with the fact that she didn’t get to spend that much time with her sister, Natasha, and is now alone. In Thor: Love and Thunder and Thor: Ragnarok, Valkyrie is the sole survivor of the Valkyrie army and no longer has her sisters. The two can bond over their loneliness and be there for each other. It’s a story of two lonely souls who eventually find each other.

While this character was hinted to appear in the MCU at a later time, there is a possibility that he could be the one to woo Valkyrie. He may be fighting against Thor as per his father’s wishes. — however — just like the Greek Mythology legend, he falls for a mortal on Earth and proves that he doesn’t need superpowers to be a God. Perhaps Val is the woman he falls for and is tested to see where his allegiance lies.

Darcy is like the next best thing for a potential love interest for Valkyrie. Both knew Thor and Jane Foster personally after all. And since nothing happened with either of them, why not try with each other? It’s like a same-sex version of what Thor and Jane had, except both live on Earth so don’t expect one to be absent for a long time. Maybe Darcy will be given the option to move in to New Asgard for work reasons considering her connections with S.W.O.R.D. and S.H.I.E.L.D.

Sif and Val have something in common – the goal to prove that women can be amazing warriors, especially in Asgard. They can go on adventures together during Valkyrie’s free time as king. Also, at the end of Thor: Love and Thunder, we see Lady Sif training Axl somewhere on the coast. Meaning, both women are on Earth, so they could potentially meet and hang out. They have similar life experiences as well. They once lived in Asgard and were both exiled, and Thor encouraged their skills and talent. Thor could have been a wingman for the two if he knew that the two have feelings for each other.

And of course, the fan-favorite ship of all – Captain Marvel. Both have the potential to be the next ideal power couple in the Phase 4 MCU. They’re both strong women with bisexual energy seeping out since their first debut. Who wouldn’t want them to date? Not to mention, Tessa Thompson is all for the ship to sail in the MCU. We’re just saying, give the fans — and the actresses playing the characters — what they want.

Valkyrie has plenty of fish in the sea if she wants to start her own dating profile in the MCU. While it’s unknown what will happen to her love life, just note that she has multiple options available. After all, a king needs their queen beside them.