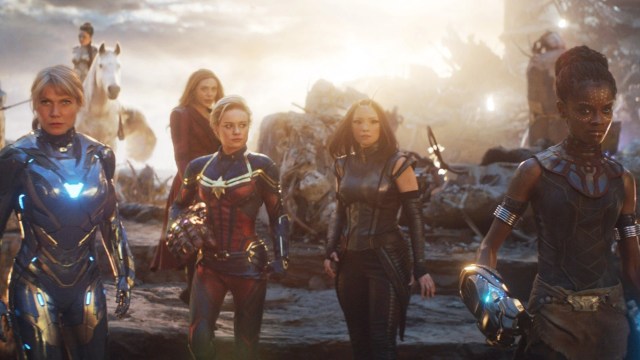 The Marvel universe is full of strong and powerful female characters. From Black Widow to America Chavez, women are not only kicking butt and taking names in their superhero roles, but also offering viewers legitimate female role models. Judging by superhero abilities, strength of character and relatability to audience members, here are five times that Marvel got girl power just right — and a few times they missed the mark.

This article contains spoilers for Doctor Strange in the Multiverse of Madness.

In the Disney Plus series Loki, female Loki variant Sylvie has spent her whole life bouncing around timelines with the goal of destroying the TVA at its very core. She’ll sacrifice anything to do that—including herself — which she does in the fifth episode. Loki had just been pruned by TVA Officer Renslayer, and Sylvie prunes herself to join him in the rumored Void where they continue looking for the creator of the TVA.

In Captain Marvel, we are practically tripping over ourselves with girl power moments. Captain Marvel, aka Carol Danvers, was the strongest superhero audiences had seen at that point. But one of the most meaningful moments of the film didn’t come from Captain Marvel herself. It came from her best friend, Maria Rambeau, when she decided to go into space with Carol to help save the Skrulls. She made the sacrificial choice to leave behind her daughter, Monica Rambeau, knowing that she might not make it home.

In Avengers: Endgame, Pepper Potts, Valkyrie, Scarlet Witch, Captain Marvel, Mantis, Shuri, Okoye, Gamora, Nebula and Wasp all come together in a fabricated moment to fight together. With plenty of opportunity to organically give these characters powerful moments, the scene feels forced and cheesy. Marvel even acknowledged that they had some concerns about the scene. Producer Trinh Tran said in an CNET interview, “In earlier cuts, when we started screen-testing it, there was a little concern for ‘Does it come off [as] pandering? Are we going to get people saying, Oh you’re just putting that scene in there just to put the scene in there. Does it actually have a story to tell with the rest of the narrative?’ That was always a concern in the back of our heads.”

The first time viewers see The Ancient One fight in Doctor Strange, they are introduced to a new kind of fighting and strength from a female. The Ancient One is also unique-looking from a physical standpoint and it’s beyond important to feature a strong female lead outside the societal beauty standards. Although she doesn’t defeat Master Kaecilius, she does overpower about a dozen of his warriors — all while remaining cool, calm and collected.

Introduced as the assistant to Pepper Potts, Natasha Romanoff becomes the franchise’s original female superhero in Iron Man 2. When she and Happy Hogan — Tony Stark’s head of security — break into Hammer Industries, Romanoff’s true Black Widow colors are revealed. She fights her way through enemy after enemy with flips, tricks and skill — while Happy Hogan slowly manages to defeat one guy. There are plenty of Black Widow moments to choose from, but this was the first real moment audiences saw what she was capable of.

Marvel miss: Pepper Potts falls into a vat of fire

This one might be a little controversial, but hear me out: when Pepper Potts fell into the vat of fire after surviving the Extremis experiments, then emerges all glowy and fire-eyed, everyone rolled their eyes. But boy, was everyone glad that Pepper had finally shed her damsel in distress skin. When Tony made Pepper her own suit, the Marvel fans totally bought into that. But the visual of sparkly fire-Pepper felt cheesy and the character deserved more.

Marvel hit: Wanda Maximoff sacrifices herself to destroy the Darkhold

Wanda has gone from villain to Avenger and back to villain again in the most recent MCU installment Doctor Strange in the Multiverse of Madness. She, like many of the female superheroes in the MCU, possesses multiple ‘girl power’ scenes to choose from. However, when looking at Wanda across the board, her strongest moment shines through when she sacrifices herself to destroy the Darkhold — so that no one will ever be tempted by it again. In giving up her life (supposedly), she is protecting all of the multiverse.

The women of Marvel are at their best when their physical strength and mental fortitude can shine naturally through storytelling, and at their weakest when put into contrived situations made to force the idea of girl power. They make the concept of heroism accessible to us mere mortals who will never know their power — and inspire each and every one of us.