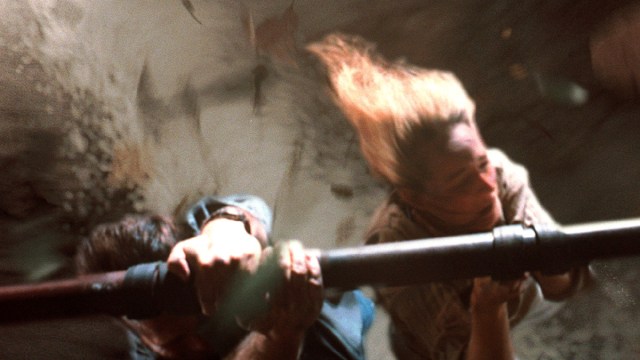 via Amblin
Review of:

Legacy sequels have become part and parcel of the modern blockbuster business, but is anyone really crying out for a follow-up to the delightfully cheesy and perennially popular 1996 box office-buster Twister?

Even though Prey director Dan Trachtenberg ruled himself out of the running, Twisters remains in development as far as we’re aware, with Helen Hunt being eyed for a return to provide the ties to the original. It wouldn’t be unfair to suggest that fans would be a lot more receptive to the idea were the late, great Bill Paxton still with us, but without him there’s a great deal less interest.

On the plus side, Jan de Bont’s big budget disaster endures as one of the finest fights of fancy to emerge from a decade where Hollywood was still getting to grips with this whole newfangled CGI technology, allowing filmmakers to blend the best of both worlds by enhancing good old-fashioned practical effects with luscious licks of digital paint.

26 years later, and the mere mention of Twister is enough to stir up warm and fuzzy feelings of nostalgia among multiple generations, as evidenced by the outpouring of emotion found on a recent Reddit thread. It’s easy to forget that the film was an absolute monster during its initial run, too, racking up $485 million at the box office before securing two Academy Award nominations.

The casting is spot-on from top to bottom, with leads Hunt and Paxton backed by a murderer’s row of character actors filling small-yet-pivotal background roles, with Phillip Seymour Hoffman’s Dusty a particular standout. Not every widely-adored favorite needs to be rebooted, re-imagined, or sequelized, and we’d love to see Twister remain part of that equation, as unlikely as it seems at this moment in time.