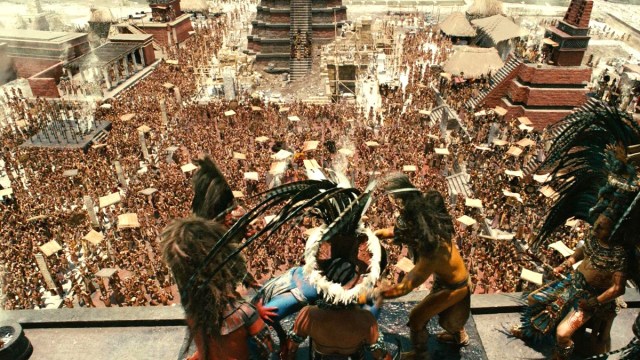 via Buena Vista
Review of:

As South Park famously put it; “Say what you want about Mel Gibson, but the son of a bitch knows story structure”. With two Academy Awards to his name for Best Picture and Best Director, that’s been proven true, but he arguably showcased it better than ever with the thunderous Apocalypto.

Staying behind the camera, which was a wise move given his reputation was in tatters when he’d been through both a highly-publicized divorce and a headline-grabbing DUI arrest in the months leading up to the historical epic’s December 2006 release, the filmmaker told a riveting, fast-paced, and frantic story without a single shred of dialogue being spoken in English.

As authentically Yucatec as you can possibly get when talking about a $40 million feature backed by a Hollywood studio, Apocalypto finds Rudy Youngblood’s Jaguar Paw captured alongside his entire village following an enemy raid. Refusing to accept his fate as a ritual sacrifice, the hunter mounts a daring escape and embarks on a perilous quest for freedom to make it back home to his wife and child.

Despite Gibson’s name drawing sighs of derision, Apocalypto fared well with critics and scooped a decent $120 million at the box office, before going on to land a trio of Academy Award nominations for Best Makeup, Best Sound Editing, and Best Sound Mixing. The gruesome levels of violence did come in for some criticism, but the unflinching brutality makes the story hit that little bit harder.

16 years on, and Apocalypto has been making another dash for freedom, this time on the streaming ranks. As per FlixPatrol, it’s been fleeing up the iTunes charts all week, delivering a rip-roaring adventure that stays with you long after the credits roll.