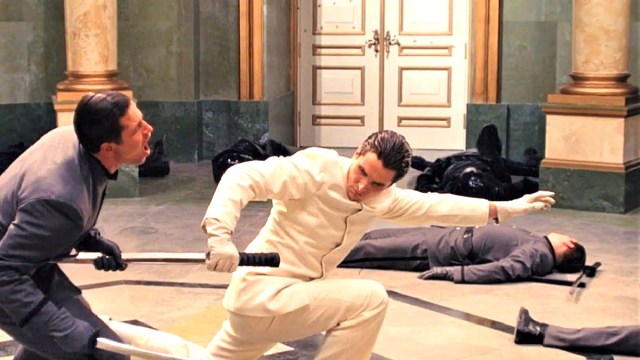 Not every movie gets to enjoy a fruitful box office run, but there are occasionally titles that can be pinpointed as cult classics in waiting from a mile off. and Kurt Wimmer’s bonkers dystopian sci-fi actioner Equilibrium was definitely one of them.

It came bearing all the hallmarks of a film that was destined to find a long-lasting second life on home video; reviews were poor, ticket sales were even worse, a great actor played did their best to treat inherently silly material with the utmost respect, and the multitude of fast-paced set pieces threw caution to the wind in the name of sheer unbridled insanity.

Christian Bale’s John Preston is a government Cleric tasked with wiping out citizens who disobey the rules installed by an oppressive regime that’s outlawed the arts, emotions, and feelings. However, after missing a dose of the drug that keeps him in check, the agent breaks free from his shackles to take the fight to those in charge.

It’s been 20 years since Equilibrium burst onto the scene to prove its credentials as a fan favorite, with an 81 percent user rating on Rotten Tomatoes almost double that of the critical consensus. Just in time for its anniversary, the mind-altering flick has now been enjoying an uptick in popularity on streaming, too.

As per FlixPatrol, Equilibrium has sliced and diced its way onto the Prime Video ranks, with those watching it for the first time in store for a real treat, as long as they’ve got a soft spot and/or preference for gratuitously violent gun kata beats and frantic swordplay.