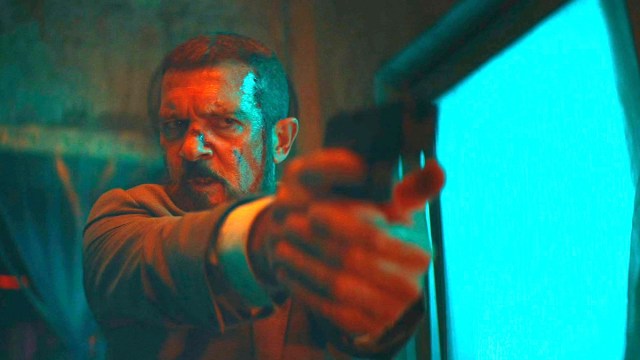 When it comes to naming the former A-list stars that are now found trawling the depths of the B, C, or even D-tier action thriller circuit, it’s very easy to forget about Antonio Banderas in among the Nicolas Cages, John Travoltas, Bruce Willis’, and John Cusacks of the industry, but The Enforcer is one of just many routine runners and gunners the Academy Award-nominated Spaniard has lent his talents to over the years.

As is all too regularly the case, they tend to be generic hostage/rescue/fetch and retrieve stories with one-word titles, so in that regard Enforcer is in very good company alongside fellow Banderas “favorites” including Autómata and Security, but it’s clear the former Zorro has been on autopilot mode in Hollywood for a while now when you remember how he phoned in his contributions to Dolittle, Uncharted, and Hitman’s Wife’s Bodyguard to name but three.

Banderas plays a man named Cuda, who is indeed the enforcer of the title. After befriending a young runaway when off the clock, his personal and professional lives collide when the shady head of the criminal organization he works for branches into sex trafficking, forcing him to try and save the young girl before his employers find them both and eliminate them.

A 25 percent Rotten Tomatoes score, 33 percent user rating, and 5.2/10 average on IMDb makes it pretty clear that The Enforcer isn’t going to reinvent the wheel, but that’s presumably why it’s become appointment viewing for so many iTunes subscribers this weekend. As per FlixPatrol, the formulaic flick has become one of the platform’s 10 most-watched titles in the United States, with Banderas continuing to state his case for becoming cinema’s premiere grizzled badass.