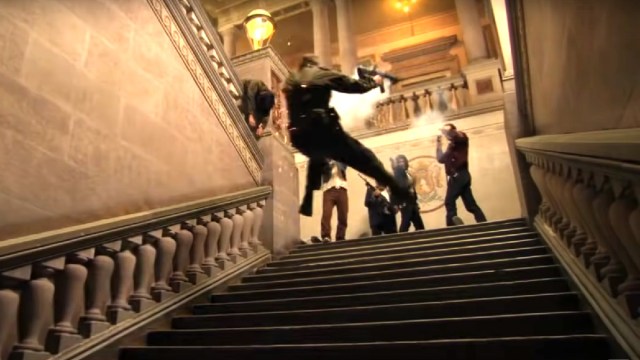 When Robert Rodriguez directs an action movie, the two minimum requirements we’ve been conditioned to expect are a star-studded and eclectic mix of names populating the cast, and a sky-high body count. Oh boy, does Once Upon a Time in Mexico have both of them in spades.

Joining returning stars Antonio Banderas and Salma Hayek in the Desperado sequel and conclusion to the Mariachi trilogy are Johnny Depp, Mickey Rourke, Eva Mendes, Danny Trejo, Enrique Iglesias, Cheech Marin, and Willem Dafoe to name but a small few, while the bullet-riddled shoot ’em up sees well over 100 people meet their ends through a variety of different means across the wall-to-wall shootouts, chases, fights, and explosions that populate the entire film.

Unashamedly pulpy fun that throws everything including the kitchen sink into the mix one way or another, Once Upon a Time in Mexico continues to endure as a fan favorite slice of unbridled imagination and unhinged insanity almost 20 year on from its initial release, with FlixPatrol revealing it to be a new resident of the worldwide watch-lists of both Starz and Rakuten this week.

The plot is utter nonsense as you’d expect, but it’s hard to care when the heightened reality of the franchise makes it perfectly acceptable for logic, gravity, and the laws of physics to be entirely discarded in favor of pure, dumb fun. Ridiculous and stupid in the best possible ways, Once Upon a Time in Mexico is guaranteed to leave you grinning from ear to ear no matter how many times you’ve enjoyed its particular charms before.