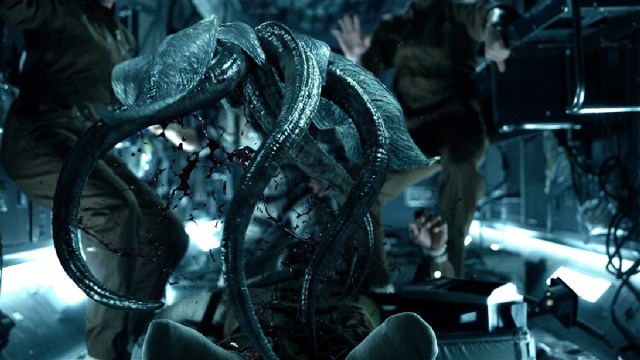 Whether it’s intentional or not, every single project that can be broadly described as a “haunted house story in outer space” owes at least a small debt of gratitude to Ridley Scott’s all-time great Alien. Of course, none of them have come close to securing such legendary status in their own right, but Daniel Espinosa’s Life does at least deliver some fun, pulpy thrills.

It helps that the filmmaker assembled a cast overqualified for selling the absolute sh*t out of the B-movie silliness unfolding in an A-list production, with Jake Gyllenhaal, Rebecca Ferguson, Ryan Reynolds, and Hiroyuki Sanada all bringing solid performances to the table in a cosmic creature feature that sees the first discovery of extraterrestrial life quickly decide that it’s aiming for the top of the food chain.

Evolving at an alarmingly rapid rate, the entity known lovingly (for a while, at least) as Calvin instantly opts to choose violence, taking out the crew of a deep-space mission out one by one. Life also wins bonus points for its ending, which might be a touch predictable if you’ve been paying close attention, but nonetheless marks a nice change of pace from the all-smiles conclusions you’d expect from a star-powered Hollywood vehicle.

Five and a half years since its initial release, the intergalactic escapade has returned with a vengeance on-demand by securing a Top 10 spot on Hulu, per FlixPatrol. Just because we’re nearing the end of November, that doesn’t mean gorehounds are going to give up on horror in favor of eggnog and festive entertainment, because there’s always an audience seeking something gnarly on streaming.