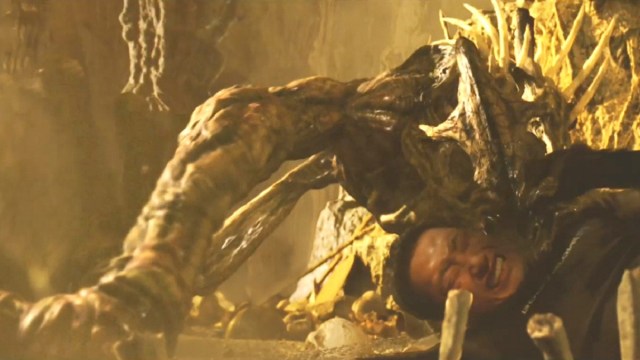 Even the worst horror movies ever made can manage to find at least a handful of supporters no matter how egregiously awful the end product turns out to be, but you may have to look a lot harder than usual to find anyone who has nice things to say about The Cave.

The 2005 subterranean creature feature came packing a decent-sized $30 million budget, with the marketing promising much in the way of unabashed terror brought to life via CGI and high production values. And yet, a 12 percent Rotten Tomatoes score and 28 percent user rating is the stuff of nightmares for all the wrong reasons, never mind the fact the 97-minute waste of a strong central premise barely managed to match its production costs in ticket sales.

However, because Halloween is fast approaching and people will literally watch anything that brings the merest promise of being scary at this time of year, The Cave has gone spelunking on the Netflix charts and come up for air on the other side as a sleeper hit. Per FlixPatrol, the universally panned flick has been crawling up the ranks for the last couple of days, and we’d be foolish to rule it out of rising even higher in spite of its reputation.

A noble band of thrill-seekers decided to go adventuring after a 13th Century cave system is uncovered after being lost for hundreds of years, but it soon becomes clear that it was way better off remaining undiscovered. Cue jump scares, things going bump in the night, and more cliches than you can shake a stick at, with The Cave leaving barely a soul impressed by the time the credits rolled.