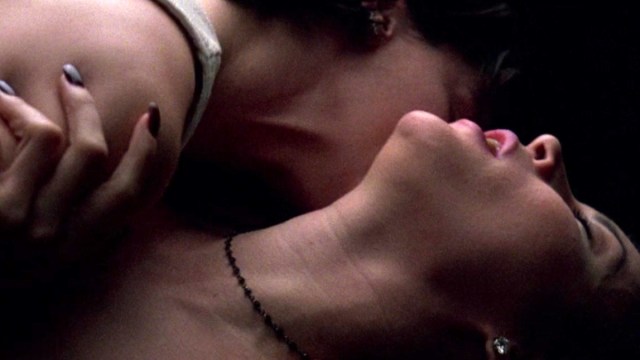 Given that their output for the last 20 years and change has almost exclusively involved high concept sci-fi dealing with so much existentialism that it borders on the pretentious, it’s easy to forget the Wachowskis made their feature-length debut as writers and directors on $6 million crime thriller Bound in 1996.

A million miles away from anything the siblings have ever made since, the noir-tinged story finds Gina Gershon’s fresh out of prison Corky embarking on a passionate affair with Jennifer Tilly’s Violet, before the star-crossed pair concoct an ambitiously dangerous scheme to help her escape from her violent gangster boyfriend with the help of $2 million in mob money.

In the buildup to Bound‘s release, a great deal of the headlines were seized by the sex scenes and shocking bursts of violence, but there’s so much more to the film than just surface-level titillation and shock value. A 90 percent Rotten Tomatoes score and 83 percent user rating underlines that fact, even if it ended up tanking at the box office with a meager $7 million haul.

Cult classics always have a way of circling back around, though, and that’s precisely what’s been happening this week with Bound after it reemerged from the shadows to become one of the top-viewed titles on Starz, as per FlixPatrol. Smart, subversive, and boundary-pushing in the way it presented a lesbian relationship in a mainstream Hollywood production without either lead’s LGBTQ+ status being central to the narrative, there’s plenty going on underneath the hood worthy of attention.

The Wachowskis made a career out of blazing a technological trail, but Bound showed from the beginning that they were ready to upend the formula regardless of genre.