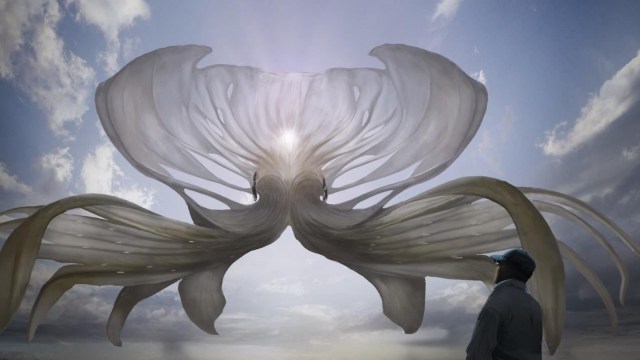 Audiences are decidedly split on their personal views regarding acclaimed director Jordan Peele’s latest venture, Nope. There isn’t room for any gray area here; you either love it or you hate it. Produced under his Monkeypaw Productions banner, Peele’s science-fiction horror follows Daniel Kaluuya’s OJ and Keke Palmer’s Emerald Haywood, two sibling horse-wranglers who attempt to capture undeniable proof of a UFO after it targets the Haywood’s ranch. After the critical and commercial success of Get Out and Us, Peele had raised the bar higher than any modern-day horror director ever had and he would have to pull out all the stops to replicate that same hype whilst also turning a profit.

It would be courteous to include a spoiler warning somewhere around here, but honestly, since Nope has been available for digital download and streaming since August, so who’s really to blame for spoilers, hm? There’s plenty of scenes in Nope that’ll have one’s hair standing on end, particularly the massacre involving Gordy, a trained chimp who turns violent midway through a shoot for a daytime TV show. It’s graphic and it’s deeply disturbing, but according to Reddit, it isn’t the worst moment in Peele’s third directorial outing.

We’ll be nice. Spoiler alert! In the climactic act of Nope, OJ and Emerald begin comprehending that the giant UFO is actually an extraterrestrial being that abducts and ingests whatever it happens to hover above. It also seems to target humans, as it tends to spit out inanimate objects that it finds trouble digesting. Steven Yeun’s character, Ricky, introduces a live show to a captivated audience, wherein he plans to use Lucky (one of OJ and Emerald’s horses) as bait to lure the UFO out of hiding. Inevitably, the plan backfires and the E.T. gobbles them all up. That’s not it, though. We get a brief glimpse of squishy pink flesh as it pulsates around a group of people that are helplessly trapped inside the beast’s oesophagus, screaming and begging for their lives.

It’s certainly an unforgettable moment and even more upsetting than the whole Gordy fiasco… somehow. Another honorable mention for scariest moment goes to OJ in the barn, where he stumbles across a bunch of kids playing a prank by hiding in the dark dressed as aliens. Needless to say, it triggers the fight-or-flight instinct immediately.

But it still appears to be that disorienting digestion that takes the cake for most unsettling scene in Nope. There’s nothing worse than imagining one’s self being eaten alive by an alien, getting claustrophobic in its oesophagus while it slowly but surely gobbles you down without even the mercy of killing you first. Even the thought alone is enough to have to hairs on the nape of your neck stand to attention.