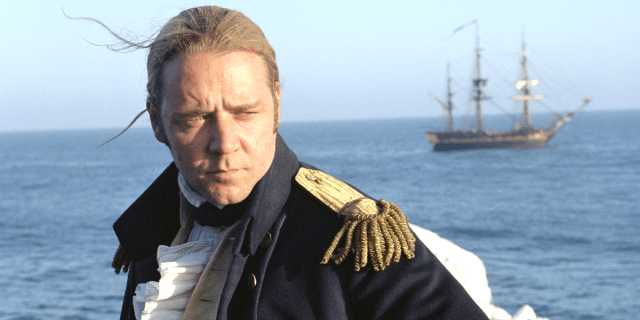 New Zealand-born actor Russell Crowe, famous for films ranging from A Beautiful Mind to Gladiator, has a talent that few other leading men can match. His characters range from understated, everyday men to heroic military leaders. Each portrayal feels authentic, even when the script itself is lacking.

The actor still draws huge audiences worldwide and shows no signs of slowing down, so fingers crossed we can expect many more great performances to come. Here is a list of Crowe’s ten finest movies to date.

While it’s not the best film Crowe was ever in, Noah is still worth a watch. His performance as the Biblical character has a torment that lends some depth. There are some epic scenes in the film, at least enough to keep the viewer interested. Ray Winstone also has some good moments as the guy out to destroy Noah’s dream building project.

Casting Crowe as Depression-era boxer Jim Braddock was a good choice. Crowe is excellent as the heavyweight champion of the world from 1935 to 1937. The big Kiwi certainly looks the part, and you can tell he is relishing the role. Renee Zellweger lends decent support as Braddock’s wife. Crowe did many of the fight scenes without the use of a stunt double which helps to give the film a believability that other boxing movies lack.

A Beautiful Mind presents us with an in-depth study of John Nash, a brilliant mathematician who sadly suffers from schizophrenia. Crowe makes the film, his sheer acting presence allowing us to identify with the flawed, asocial genius. The film also features an excellent supporting performance from Jennifer Connelly as Nash’s wife.

Crowe’s breakthrough 1992 role sees him play against type as psychopathic Australian skinhead Hando. He leads a pack of Neo-Nazi thugs in the mean streets of blue-collar Melbourne, taking out their hatred on a group of Vietnamese immigrants. Romper Stomper is difficult to watch. Even by today’s standards, the violence is full-on. Crowe is brilliant and disturbing as Hando, a wannabe Hitler with a snarling, manipulative streak. This is the sort of film you only need to watch once, but the effects will stay with you for a long time.

Russell Crowe in a Wild West setting does not disappoint. He plays Ben Wade, a quiet man, and a stone-cold killer. Christian Bale plays Dan Evans, the small-time rancher given the unenviable task of guarding Wade until a train can arrive to take him to court in Yuma. The movie becomes a battle of wills between an ordinary man and a dangerous criminal. Overall, this is a solid Western and a fine addition to Crowe’s filmography.

A no-nonsense cop is on the trail of an up-and-coming mob boss. Crowe is the cop and Denzel Washington the gangster. These two major stars make American Gangster number five on this list, and the scenes where they are on screen together are easily the best in the film.

The Insider may not have wowed audiences on release, but it has gained a steady appreciation over the years for its realistic, understated performances. Jeffery Wigand (Crowe) is a chemist who becomes a whistle-blower on the dangers of smoking and the evils of the tobacco industry. Al Pacino is 60 Minutes producer Lowell Bergman. This is one of those films where Crowe is not playing a general or a sea captain, but a very ordinary man, and he strikes the balance just about perfectly, giving us the right level of acting to let the historical character shine through.

Set in 1950s Los Angeles, L.A. Confidential is a rich, sprawling, cop’s-eye-view of a city drowning in sleaze. Crowe plays one of his most complex characters, Bud White, an uncompromising officer who uses rough methods to achieve results. Among a sea of excellent actors, Crowe’s performance stands out as the most real. Bud White appears at first to be the typical all-American tough guy, a man who is not afraid to break the law to protect the public. But as we watch, we discover that he is the most human of them all, and it is his lack of corruption and inner truth that makes the audience identify with Bud so much. The scenes between Crowe and Kim Bassinger are all excellent, helping to paint a rounded picture of a complex character.

He is Maximus Decius Meridius, commander of the Armies of the North, General of the Felix Legions, father to a murdered son, husband to a murdered wife, and he will have his vengeance, in this life or the next.

For good reason, Gladiator is probably the most famous Russell Crowe film. A sweeping Roman epic that takes what was great about classic sword and sandal films and updates the genre for modern audiences. The spectacle of the Colosseum allows for plenty of gory violence, but it is Crowe’s performance as the honorable soldier betrayed by the Empire he has sworn to serve that truly captivates the viewer. Joaquin Phoenix is engagingly unhinged as the debauched and incompetent Emperor Commodus. Oliver Reed makes his superb final screen appearance as the grizzled gladiator turned free man. Crowe got the Best Actor Academy Award for his portrayal.

1. “Master and Commander: The Far Side of the World”

An incredible film that was callously overlooked at the time, Peter Weir’s 2003 epic is one of the finest-crafted historical movies ever. Crowe plays “Lucky” Jack Aubrey, brave but troubled Captain of H.M.S. Surprise on a mission to hunt down a vastly superior French ship. He exceeds his orders and pursues her into the boundless Pacific. Paul Bettany offers a perfect accompaniment to Aubrey in the form of ship surgeon and naturalist Stephen Maturin. The interplay between these two characters is what makes the film. Jack is always conscious of his naval duty, while his friend Stephen is determined that the Surprise should act as his personal yacht, stopping at every island so he can collect botanical samples for the advancement of science.

Based on the seafaring novels of Patrick O’Brian, every scene oozes authenticity. There are very few historical films where the viewer truly feels they have been transported to the past, but Master and Commander is surely one of them. The detailed set design, period language, and realistic action are unparalleled. If you decide to watch only one of the films on this list, make sure it is this.