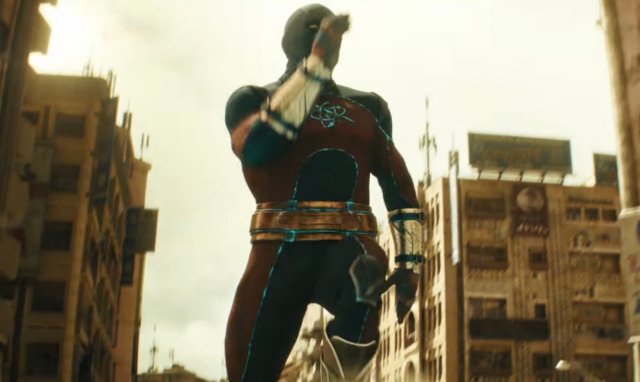 DC Comics fans are eagerly counting down the days before Black Adam debuts on the big screen. Not only will the film feature the first onscreen appearance of the titular anti-hero, but the film will also be the big screen introduction to several members of DCs oldest super-team, The Justice Society of America. But Noah Centineo, who stars as JSA member Atom Smasher, is telling fans not to expect a fully-formed version of the comic book character.

Speaking to Screen Rant, Centineo explained that the DCEU version of Atom Smasher will be a young man just learning what it is to possess great power. When asked what his character would be like in the upcoming film, Centineo answered:

“In the comic books, he’s a fully formed superhero, right? He’s an adult. In this movie, though, he’s kind of a young man. He’s a young metahuman that gets to, for the first time, take that first step into what it means to be a superhero. He comes from a pedigree of superheroes, and his grandfather was actually a supervillain, but not by choice. He was kind of forced into it, and he did rectify it in the end.”

Centineo refers to his grandfather, a villain known as Cyclotron, who faced off against the golden age version of The Atom in the comic books. In the DC Comics continuity, Albert Rothstein was the godson of Al Pratt, the original Atom. Goldstein acquired his power to alter his body mass from his grandfather, going on to become the superhero Nuklon and later changing his name to Atom Smasher.

Centineo’s statement may imply that the original Atom will exist at some point in DCEU continuity, which may indicate the other Golden Age superheroes exist as well, including the Alan Scott version of Green Lantern, and the Jay Garrick incarnation of The Flash, both former members of the JSA.

In the meantime, fans can look forward to seeing Atom Smasher grow. Not just into a giant, but a true hero. “With all of that familial history, he feels a driving force to prove himself,” Centineo says, “to find his way and his path and to do good and establish himself as a good person and a superhero. You get to really see that transitional phase, which I don’t think you get to see often.”