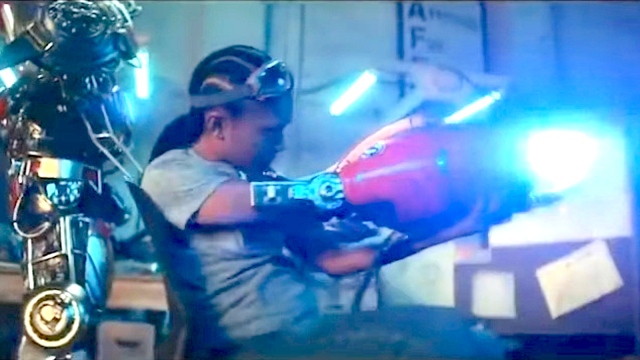 As we digest every morsel of information we can get our hands on about Black Panther: Wakanda Forever, which is still almost an excruciatingly month-long wait away, we got treated to another small tidbit to chew on.

This tease involves a slightly closer look at Riri Williams aka Ironheart, who will be played by Dominique Thorne in the upcoming film.

In a crossover advertisement for Target, Riri is seen in a very familiar Tony Stark-esque scenario, assembling and working out the kinks with her suit. She walks into a Target store and sees a young child doodling a picture of a power source.

She takes inspiration from the young girl and applies the concept to her Ironheart suit, which successfully powers up – as does the little girl’s Lego in a cutaway shot.

The true treat, however, comes right at the end, when we see Riri equipped with one of her blasters, and decides to take it for a spin – and it doesn’t go quite as planned.

For those unfamiliar with Ironheart, she is a relatively new character to Marvel comics, an addition only recently made in 2016. Much like her namesake, she is gifted with tinkering with all things tech, and as such assembles herself an Iron Man-inspired suit using materials nicked from MIT. She nearly gets caught doing so but makes her escape in her newly constructed super-suit.

Tony Stark then tracks her down and decides to take her under his metaphorical wing, but sadly, and for obvious reasons, this is unlikely to be the way things will play out in Black Panther: Wakanda Forever, which hits cinemas on Nov. 11, 2022.

Perhaps we may see Robert Downey Jr pop back into the MCU in to say hi in the Ironheart Disney Plus series instead, coming late next year.