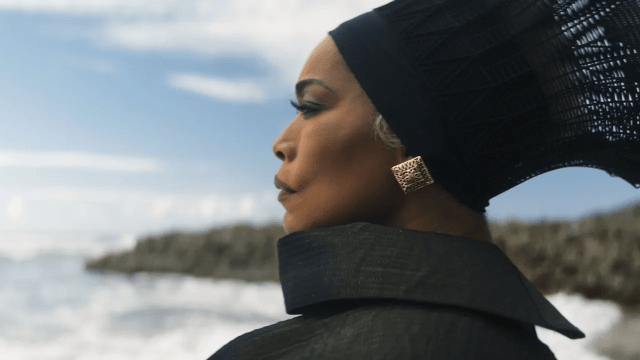 Black Panther: Wakanda Forever star Angela Bassett is explaining a bit more context about why she was against a certain pivotal scene taking place in the Marvel Cinematic Universe sequel.

By now, it’s well-known that Chadwick Boseman’s King T’Challa has passed away in Wakanda Forever due to the actor’s sudden and tragic real-life death from a secret battle with colon cancer back in 2020. However, T’Challa’s death is not the only tragic and shocking moment in the film.

In Wakanda Forever, Bassett’s Queen Ramonda is one of the last threads of her lineage after the passing of both her son T’Challa and husband, John Kani’s King T’Chaka. But even Ramonda’s life is sadly cut short at the hands of the Tenoch Huerta’s Namor through the course of Wakanda Forever, leaving only her daughter, Letitia Wright’s Shuri, to pick up the pieces.

It’s a moment that serves as a veritable gut punch to the viewer and one that Bassett was originally hesitant to get behind. As Bassett explained to Entertainment Weekly,

“Queen Ramonda, queen mother, you know, who wants their mother gone from them, gone very far from them? You don’t, do you? No. She’s beloved. I love playing the queen finally and also the audiences love that the queen represents their mother.”

However, at the end of the day, Bassett’s faith in director Ryan Coogler’s storytelling sensibilities prevailed, saying the director “knows what he was doing because the collective awe when that hits you, I mean it’s just visceral.”

Bassett also said it was a challenge remaining tight-lipped about Wakanda Forever‘s plot details, even to her own children, because she tries to never lie to them: “I didn’t lie. I just didn’t say anything. [I said], ‘I don’t know, we’re gonna see.'”

Black Panther: Wakanda Forever is playing at a theater near you.