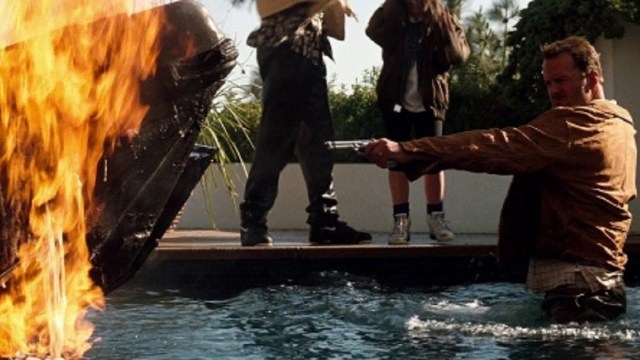 Having nailed the formula with his very first screenplay, one that continues to cast a shadow over the genre to this day, expectations were high when it was announced Lethal Weapon writer Shane Black was heading back into buddy cop territory with The Last Boy Scout, especially when he was being paid a record $1.75 million fee to write it in the first place.

Bearing all of his signature hallmarks that included (but was absolutely not limited to) bickering partners paired up against their will to meet a shared goal, rat-a-tat rapid fire dialogue exchanges, jet-black humor, one-liners that stick in the memory, excessive violence, much foul language, and plenty of gunplay, it’s a miracle the end product turned out as great as it did.

Stars Bruce Willis and Damon Wayans hated working with each other, producer Joel Silver was causing problems by inserting himself too heavily into the production for the liking of director Tony Scott, who himself faced issues trying to cajole his two leads into putting their differences aside, with stories from the set making it sound like a whole lot of d*ck-measuring was going on.

Pages of the screenplay were being rewritten on the fly, a grandstanding finale was added to up the action quotient, and even the post-production process proved to be a nightmare that saw multiple editors hired and fired, with poor test screenings leading Warner Bros. to believe they had a bomb on their hands. In the end, The Last Boy Scout earned a respectable $114 million at the box office on a $43 million budget, and the door was left wide open for sequels.

Obviously, the fact everyone f*cking hated each other meant it was never going to happen, but nobody knew that at the time. More than 30 years later, though, and a Reddit thread has found the fantastic caper being lavished in the utmost praise, with many lamenting the fact The Last Boy Scout didn’t get the franchise treatment everyone would have loved to see.