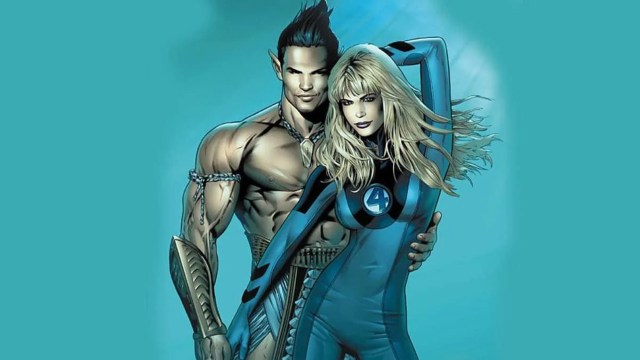 With Black Panther: Wakanda Forever now in theaters, one of Marvel’s oldest characters is finally part of the MCU. Fans have been waiting for Namor the Sub-Mariner to make the jump to live action for, well, decades, but maybe it’s best that he’s only just appearing now as his arrival could not be more timely. After all, we’re on the cusp of having the Fantastic Four folded into the franchise, which means we may be about to get one of the Marvel world’s original love triangles brought to life.

As everyone knows, Mr. Fantastic and the Invisible Woman are the very first Marvel romance and have enjoyed a much steadier and healthier relationship than most superhero power couples over the years. That said, their marriage has always been put to the test whenever Namor shows up as the merman mutant monarch has had an infatuation with Sue Storm since the very beginning.

So what’s the deal with Namor and Sue in the comics and could this really be adapted for the MCU? Let’s see…

Namor debuted in 1939’s Motion Picture Funnies Weekly #1, which was reprinted in the very first issue of Marvel Comics later that year. The modern incarnation of the character, as reimagined by Stan Lee, appeared in 1962’s Fantastic Four #4. This story set him up as the anti-hero, with Namor attempting to get revenge against the land for crimes against the sea. Not that he hated all “land-lubbers,” as the Atlantean king immediately fell in love with Sue.

So began an epic rivalry between the First Family and Namor, which often featured the Sub-Mariner kidnapping Sue and attempting to take her back to Atlantis to be his queen. As the Silver Age gave way to the Bronze and beyond, however, with Sue thankfully given more agency, their dynamic grew from a simple villain/damsel-in-distress remit into something more complicated as Sue grappled with her own attraction to Namor.

While Sue’s love for Reed Richards has never been called into question, her genius husband is typically not the most affectionate man. He frequently focuses his attentions on scientific endeavors, whereas the passionate Namor doesn’t lack in that department. Sue has never been depicted as actually cheating on her husband, but you could argue that she has had emotional affairs with him on occasion.

Things went differently in 1976’s What If…? #1, though, which imagined a timeline in which Spider-Man joined the FF. Here, Spidey’s role in the team leaves Sue feeling left out. That leads her to strike up a relationship with Namor, going on to become the queen of Atlantis alongside him and giving birth to their child, Leonard. Still, even in this timeline, they didn’t end up together as Sue ultimately dumps him for Reed and normality is restored.

Could a Namor/Reed/Sue triangle happen in the MCU?

Given the rich history between these two characters in the source material, will Marvel Studios embrace the potential love triangle they have at their disposal? Honestly, we hope so.

With no offense intended to Ioan Gruffudd, Jessica Alba, Kate Mara, and Miles Teller, Fox’s iterations of Reed and Sue were seriously lacking in chemistry, so Marvel needs to make sure the pair are actually an interesting couple this time around. One way to do that would be to introduce a third party into the relationship. Fans can’t get enough of love triangles, and it’s easy to imagine social media getting riled up as folks endlessly debate whether Sue should get together with Reed or Namor.

In many ways, this triangle resembles that between Logan, Scott Summers, and Jean Grey, which was one of the most enduring plot points of the X-Men movies. There is already a blueprint of sorts for the studio to follow here, not that the MCU’s Reed should be as much of a wet blanket as Fox’s Cyclops.

On the back of Namor’s immediate popularity in Black Panther: Wakanda Forever, we’re betting the fandom would go crazy if the so-called “boy without love” found love with Sue Storm in Phase Five.