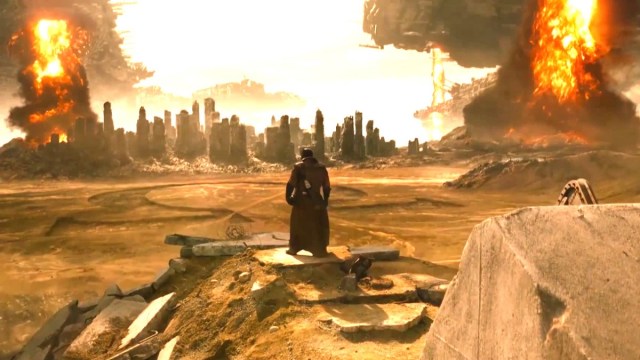 Fans of the so-called DC Extended Universe, the informal name for the shared cinematic universe of DC films that became its defacto moniker, are celebrating the departure of executive Walter Hamada.

It’s official: Hamada is officially no longer President of DC Films after helming the role since 2018. What’s more, he is also exiting Warner Bros. completely after being with the company for the last 15 years, according to Deadline.

This all comes with a regime change at the company thanks to a newly-minted CEO, David Zaslav, as part of the newly-merged company Warner Bros. Discovery. Before the change of leadership was finalized over the summer, Hamada had re-upped his contract in 2021, which was supposed to keep him installed as DC Films President through 2023.

Hamada has been a name not favored amongst many DC movie fans, particularly those who are loyal to director Zack Snyder. There’re a few different reasons for that, including that actor Ray Fisher — who portrayed Cyborg in 2017’s Justice League and 2021’s Zack Snyder’s Justice League — has accused Hamada of sweeping allegedly toxic on-set behavior from his subordinates, which caused distress to Fisher and others, under the rug. Fisher has continued to ask Hamada for an apology, despite the regime change.

It has also long been speculated that Hamada is the one who is personally responsible for abandoning Snyder’s vision for overseeing a planned universe of DC films, including a Cyborg solo movie. Henry Cavill has long been a fan-favorite as Superman, ever since the Snyder-directed 2013 film Man of Steel. Now, an article from The Hollywood Reporter has all but confirmed Hamada was the one responsible for halting Cavill’s return to the DCEU, despite Black Adam star and producer Dwayne “The Rock” Johnson lobbying DC for Cavill’s comeback for years.

“HALLELUJAH! Walter Hamada is no longer the president of DC Films,” one commentator wrote.

“Henry Cavill is coming back as Superman,” was the caption one fan wrote, alongside a GIF of people applauding, in reference to THR’s report that the new DC leadership is gung-ho for Cavill and eyeing a sequel to Man of Steel.

“Everything is in place for Zack to come back now. Toby Emmerich fired, Ann Sarnoff fired, and now Walter Hamada fired. They have his cast back such as Ben, and Henry. We are in a much better position then where we were a year ago! #BringBackZackSnyder #RestoreTheSnyderVerse,” one fan wrote.

Back in August, it was revealed that Ben Affleck would also be returning to the DCEU via an Instagram post with Aquaman and the Lost Kingdom star Jason Momoa on the set of the film. That simple fact, along with Cavill’s return and Hamada’s apparent firing, is beginning to spark hope amongst DC fans that the vision laid out by Snyder years ago may yet come to pass.

“RestoreTheSnyderVerse𓃵,” was one DCEU fan’s succinct call to action following the news.

While it’s completely unclear if this is related, Wonder Woman star Gal Gadot happened to also make a Twitter post on Wednesday saying she was “Starting my day with a smile 💙.”

“[E]verybody is smiling now,” was one fan’s response to Gadot’s post while signal boosting the news of Hamada’s exit.

Since Gadot was one of the actors who backed up Fisher’s claim of Justice League director Joss Whedon being abusive on set, perhaps the cheery selfie might not be a coincidence following the news at DC, after all.

If you really want to see how the DCEU has changed recently, check out Black Adam this weekend, as there is a certain end-credit scene that Johnson has heavily teased in recent weeks that is directly related to the movie studio’s regime change. Don’t let us spoil it for you, check out Black Adam in theaters on Oct. 21.