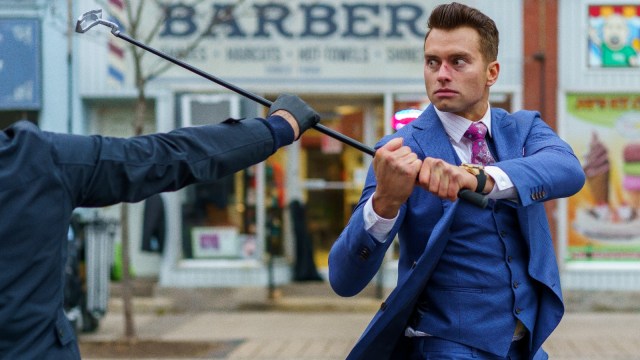 Netflix might be shedding subscribers, laying off staff, and watching its stock value plummet, but for those loyal customers who stick around, the strength of the brand is more than enough to convince them to check out the platform’s latest splashy release. Which is just as well, because The Man from Toronto finds itself being panned.

Sony may have saved face by selling the distribution rights off to the streamer, because there’s a distinct possibility the odd couple action comedy that partners up Kevin Hart and Woody Harrelson would have tanked at the box office given the $75 million budget, not to mention the fierce competition in the current theatrical marketplace from the likes of Top Gun: Maverick, Elvis, Jurassic World Dominion, and Lightyear.

At the time of writing, The Man from Toronto holds a measly 27 percent score on Rotten Tomatoes, and while Red Notice was similarly greeted with an apathetic shrug before becoming Netflix’s biggest hit of all-time, the star-studded caper at least had the benefit of a rapturous audience score, something the 55 user rating of Hart’s latest doesn’t have.

Either way, poor reviews and a general sense of malaise hasn’t stopped The Man from Toronto leading the pack on the global charts. As per FlixPatrol, The Expendables 3 and The Hitman’s Bodyguard director Patrick Hughes’ latest has instantly topped the rankings in 58 countries around the world. A strong opening weekend is guaranteed, then, but we’ll see how long the film manages to remain at the forefront of the conversation.