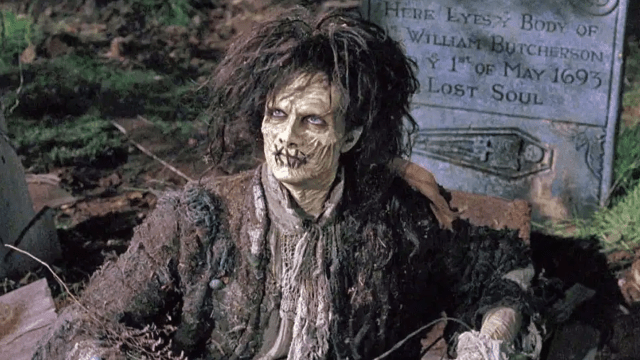 At the end of September, Hocus Pocus 2 will bring the public back to a world which became a cult hit through repeated showings on television. Bette Midler and her iconic witch sisters are back, as well as fan-favorite Doug Jones’ Billy, whom Jones says has more things to do this time around.

The actor shed light on the character he first played in 1993 in an interview with Entertainment Weekly. The piece reveals a first-look at his return to the good zombie many fans do not at first realize is a positive player. Jones says he will come out of the grave speaking, fans will get a look at how his relationship with Winifred crumbled, and he even makes a friend who is a bro. As EW‘s Joey Nolfi reports, “Jones likens it to their ‘own little buddy film going off on the side as the movie plays out,’ which he hopes fans will find to be as ‘charming and lovely’ as he does.”

Later in the article, Jones says younger crew members shrieked with joy when they got to see him back in costume for the first time. He also says much of the same team from the first film returned, his costume has no differences to it, and, they even managed to find an original prop in storage to reuse so he felt like he had stepped back in time to when he was more agile.

“It was the exact same wig, they had it on a dummy on display for 29 years, they put it back on my head in the same style, it didn’t even need a touch-up. It was so nostalgic for me to look in the mirror and go, ‘You’re 30-nothing years old again.'”

Hocus Pocus 2 premieres Sept. 30 on Disney Plus. It follows a new group of teenagers who must stop the Sanderson sisters after they have returned once more to present-day Salem. Some original stars were also set to return, but could not due to scheduling issues. In contrast to the original, the sequel may have multiple musical numbers throughout its runtime.