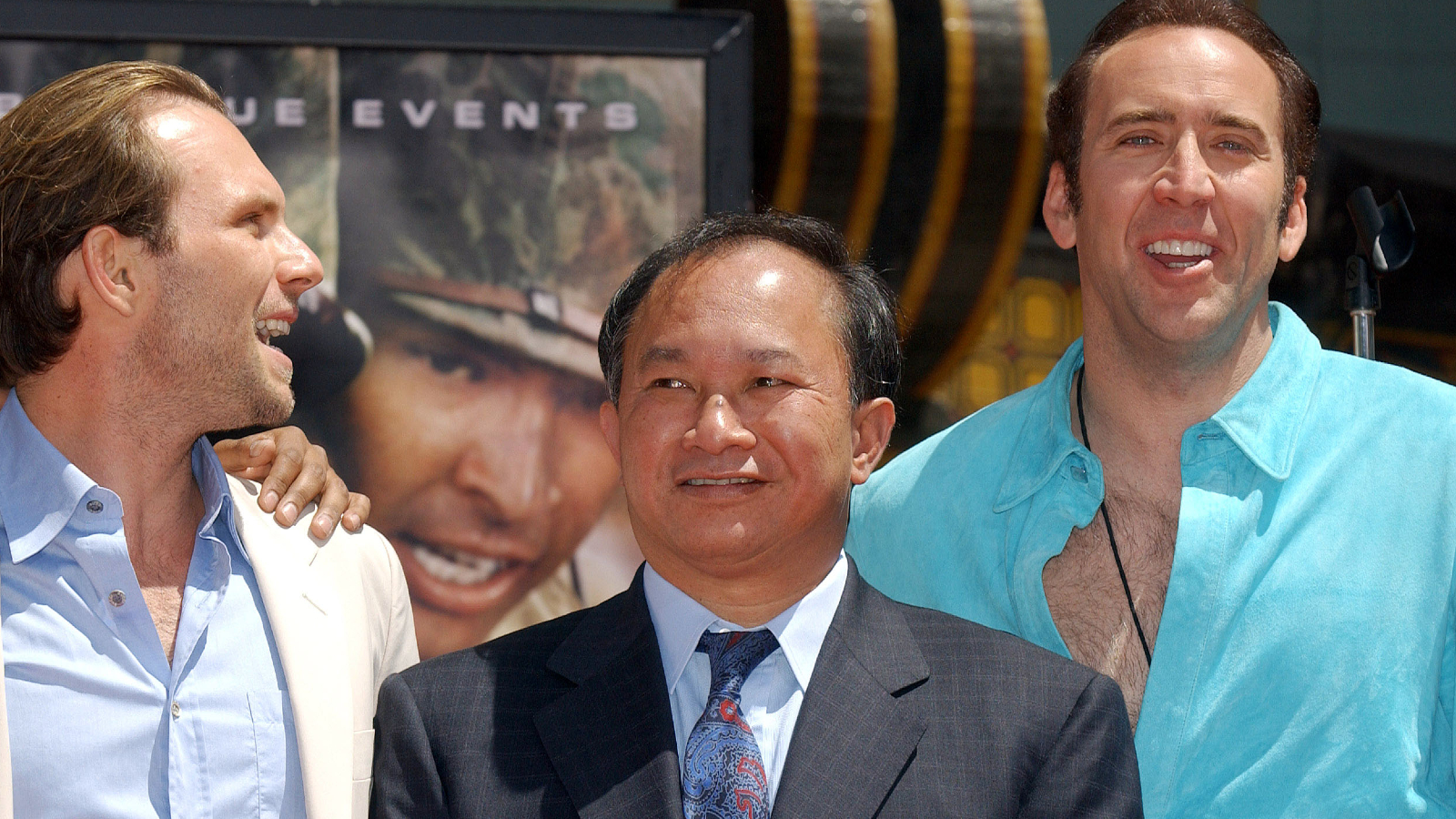 John Woo had made an impact on US films before he even started making them.

After countless Chinese movie masterpieces, starting as a director in 1974, Woo went on to rack up some memorable movies across the ocean nearly two decades later when he started making American films in 1993.

Sadly, for fans of his films and frenetic-yet-poised take on action cinematography, his stint as a director in the United States, and as a whole, slowed down quite a bit after that.

After teaming up with action star Jean-Claude Van Damme for his first US-based feature, audiences knew what they were getting from Woo, but the films themselves didn’t totally deliver as his style and vision were held back by the more meddlesome US studios (a common theme for many a director).

Following that first film in ’93, Hard Target, Woo waited three years to take on another project, and following that, he became ultra-cautious in taking on a project, and eventually almost ditching US filmmaking altogether.

Now though, hope is renewed with multiple US-based Woo projects on the horizon in the next two years, with hopefully more to follow.

Before then, let’s look back at the legends he’s given us, featuring two main actors twice.

Having worked with John Travolta before on Broken Arrow, the rapport between the two allowed for immense creativity and really letting things go off the hinges a bit.

Adding Nic Cage to that mix, whom Woo would work with once again as well, gave a larger audience entrance into what Woo is capable of, even if it still felt somehow a tiny tad restrained.

It wasn’t the most Woo movie he made in the US, but it was the best all-around movie considering the director, casting, story, and of course, special effects and action sequences.

This was Woo’s first project he took on after feeling that he got burned by an American studio once again with the aforementioned Broken Arrow, but it was a process. Woo reportedly turned down the offer several times until the script was rewritten to a place he approved of, instead of taking on a script and hoping he would be allowed to make the changes he wanted.

The fact that Paramount Pictures allowed Woo to make the movie he wanted to brought to joy to many faces, as it was his second-highest grossing film after it all.

We all knew Travolta could do crazy, we knew Cage could bring chaos to any role, and with Woo’s signature storytelling and style, it was a bonanza of fun an action for all.

Did someone say crazy and chaos?

Enter the man still trucking along and proving to everyone that he embodies both those words in his roles, even without meaning to (or maybe it is all intentional) — Tom Cruise.

With this movie, armed with the Cruise that has evolved the franchise and despite an R rating, Woo laid the groundwork for the direction of the franchise (consider: Mission Impossible 7 is coming soon).

This still stands as Woo’s highest-grossing film, but the reason it gets such a high ranking is because it was Cruise embodying some of the best of Woo’s characters from his previous international work, and the action alone more than makes up for the not-so-inspiring script.

Maybe it’s considered the weakest of the M:I entries in the franchise, but it’s definitely not Woo’s weakest US film.

Something a bit staggering to look back on considering the opening earnings of movies now (thanks, Marvel), Mission: Impossible 2 had the third-highest opening weekend of all-time only behind behemoths The Lost World: Jurassic Park (the second in that film series) and Star Wars: The Phantom Menace (the looooooong-awaited new Star Wars film). In total, the movie made $546,388,105 worldwide.

Being that Cruise doesn’t mind going a bit crazy, and that he usually gets his way, this movie actually lands a lot of what it could be.

Reading Roger Ebert’s review of the film still encapsulates what the movie really was, with lines such as:

“Stunts and special effects don’t interrupt the plot, but are the plot.”

“As for the movie itself: If the first movie was entertaining as sound, fury and movement, this one is more evolved, more confident, more sure-footed in the way it marries minimal character development to seamless action. It is a global movie, flying no flag, requiring little dialog, featuring characters who are Pavlovian in their motivation. It’s more efficient than the Bond pictures, but not as much pure fun.”

If you’ve only rewatched Face/Off and not Mission: Impossible 2, give it a whirl, it’s worth the fun.

If you’re a fan of Woo, you may already know that the filmmaker had to edit his first US-based movie nearly two dozen times for it to achieve an R rating back in 1993. Granted, restrictions for R were a lot tighter back 20 years ago, and today his first version might fly, but back then there was a lot that studios decided audiences couldn’t handle. (Cue The Simpsons’ Helen Lovejoy shouting, “Won’t somebody please think of the children?”)

Back to modern times, and finally, after much deliberation and consideration, the closest thing to Woo’s original was released in 2021.

Put yourself back in time when watching Van Damme do his unhinged thing, replete with crazy eyes and emitting sounds that are oh so fun to recreate, and it was a perfect team up.

Legend has it that Van Damme had too many oversights as well, adding to the peril of the director and the final outcome.

This one could’ve been a classic, and the way movies gain cult status these days or “find a new life on streaming” it could be that the original American movie from Woo will wind up gaining its rightful status someday anyway.

It’s just a shame we had to wait 30 years to see what could have been a proper launchpad for Woo’s US career and not had him gun-shy to do American movies. After seeing how his US career played out, compared to what he was able to do in China, it’s rightfully so.

Legend has it (Part II) that Sam Raimi, who was onboard the film to help oversee and ease Woo into US filmmaking, was the saving grace that kept it from becoming an even bigger travesty.

While the most recent version at least restores some of Woo’s vision, the parts Van Damme got his way with probably kept it from being the best version of itself.

Another “what could have been” film, we still get some scene-stealing action from Travolta and Woo — plus, this led to them teaming up again for Face/Off.

Christian Slater is a bit miscast here, and there weren’t a lot of audiences clamoring to see the former heartthrob as an action hero, yet the movie opened at No. 1 in North America and went on to gross more than $150 million worldwide.

Woo returns after three years away to give us the follow-up to Hard Target while laying the groundwork for him to push back on the Face/Off script until it met his vision, so we’re seeing the movie through some less-judgmental eyes.

If Mission: Impossible 2 was heavy action, light talking, this was its opposite with way too much dialogue and not nearly enough action to satisfy.

The train stuff is cool, the fight is some good stuff, and the score gives us some awesome Hans Zimmer, but maybe in a parallel universe there’s a better movie in here we’re just not seeing.

Welp, we’re at the fifth-best American movie from Woo, but if you’ve seen this Ben Affleck-led, um, gift of a film, then you know it shouldn’t be in any positive top five. You might also notice that Woo only made six US movies, so you can consider this also his second-worst one, though it’s almost a tie or toss-up between this and our next entry.

The saving grace here is that Woo gives us more action and explosions, but it feels almost like a precursor to some of Jerry Bruckheimer’s worst.

And sadly, this was back when Affleck was making movies that definitely felt like his career was on the brink as well, even though he miraculously got away from the edge to make and even star in some damn-near masterpieces.

It seems that once again, it was either script or studio that held Woo back from making the movie he wanted to, but it’s not the worst movie ever made.

Yeah, perhaps Paycheck is the worst Woo movie, but Windtalkers is just a bad movie, for anyone, by anyone, involving anyone.

Coming off their collaboration for Face/Off, fans probably thought they’d get something super cool with the two coming together again five years later.

They would be wrong. So, so wrong.

Of course, this is another movie that Woo had to cut due to violence to get it from the then-dreaded NC-17 rating down to an R.

That’s two of six, one-third, that he had to cut to make it fit the bureaucratic and puritanical MPAA.

However, it turns out that maybe the version we saw was actually what Woo wanted in a way, as he tried to move beyond what he was known and loved for, so too many things got lost in the fray between him and the studio, leading to another movie that leaves the imagination and audience wanting more.

Talking to Entertainment Weekly in 2009, Woo had this to say:

“The main themes of Windtalkers are friendship and understanding. Unfortunately, the studio wanted a John Wayne movie, just a typical American hero film with explosions every few minutes. I had to make them understand that this wasn’t a story about heroes; it’s a story about a man and his own demons, trying to redeem himself from war. I made the movie that way, but some people in the studio didn’t appreciate it and, in the end, I guess neither did the audience.”

Maybe we need to rewatch this one too through the view of what Woo said, but still, it winds up neither great action movie, epic war movie, super Nic Cage movie, wonderful John Woo movie, or even a film that embodies, as he said, “friendship and understanding.”

There you have it, all six of Woo’s American-made movies to date.

We know there’s at least two new Woo-made American viewing experiences coming to the US, albeit in very different forms.

First up is Silent Night, which is slated to be an action movie without any dialogue at all, according to Deadline.

So those clamoring for more action, less talking are getting exactly what they wished for.

The next from Woo after that won’t be in theaters, with his English-adaptation of his own film, The Killer, set to come out in 2023.

A no-dialogue flick and a version of a movie he already made well?