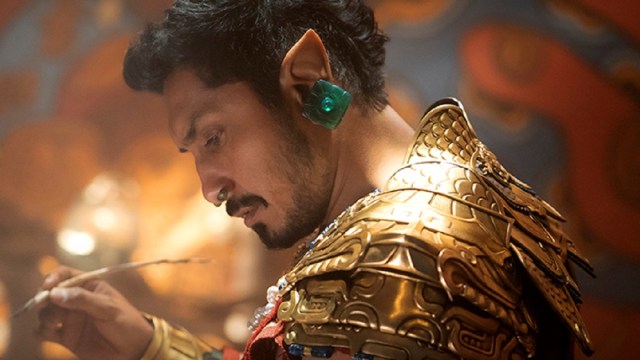 It’s finally here! After years of waiting, the death of its star, and COVID-related issues affecting production, Black Panther: Wakanda Forever is here. People are obviously excited about the movie, and it’s expected to make truckloads of money.

One of the cool things about a sequel, especially an MCU sequel, is the addition of brand new characters to the franchise. This movie is no different, so let’s take a look at all of the new faces appearing in Wakanda and the underwater kingdom of Talokan.

In addition to the fresh faces, we get to see some old ones as well. Who are the returning characters? There’s Queen Ramonda (Angela Bassett), Princess Shuri (Letitia Wright), Okoye (Danai Gurira), M’Baku (Winston Duke), Nakia (Lupita Nyong’o), and Everett Ross (Martin Freeman).

Now let’s get into the new characters. This is a good place to stop reading if you don’t want any spoilers about the film. I can’t say it enough. SPOILER ALERT.

Namor is probably the most significant new addition to the movie and the one most central to the movie’s plot. He is actually one of the oldest Marvel superheroes, but the movie version is a bit different than that from the comic books, where he’s also known as the Sub-Mariner/Submariner.

The easiest comparison is to DCU’s Aquaman, and, to be honest, they’re both pretty similar to each other. They both rule an underwater kingdom, both have powers that include super strength, agility and endurance, and both can breathe, see, and hear underwater. One thing Namor can do that Aquaman cannot is fly. He also does keep his pointy ears and the wings on his feet from the comics.

Perhaps because of the similarities between the two characters, Marvel decided to make some changes to its live-action Sub-Mariner. Whereas Namor presides over Atlantis in the comics, the MCU’s underwater culture is rooted in Mesoamerican mythology. Deep in the ocean, he rules the underwater kingdom of Talocan, which is based on the Aztec netherworld Tlālōcān. Actor Tenoch Huertas even learned how to swim and to speak Mayan for the film.

Talocan is a sort of parallel world that can be reached through any body of water, amd Namor’s narrative revolves around vibranium being discovered in his realm and the need to find an ally to help him. Wonder who that could be?

Riri Williams is also one of those super important new characters. She’s especially notable because the movie’s acting as her introduction for her upcoming Disney Plus, Ironheart.

Who is she? Williams is a brilliant prodigy in engineering who got her start tinkering with electronics in her dad’s car repair shop. She eventually gets accepted into MIT and invents something that gets a lot of people interested in her, both for better and for worse. Ironheart made her Marvel comics debut in 2016, and she’s played by actress Dominique Thorne (Judas And The Black Messiah).

She has two suits of armor (one after the government tries to capture her and the second at the end of the movie). She was forced to leave the second armor in Wakanda by Shuri, so she’ll probably make a new one in the TV show. Marvel has already announced that The Hood (Anthony Ramos) will be the antagonist in the series.

Think of Attuma as the classic strong and silent type. He’s one of the most powerful and quickest warriors in Talokan, and he and his fellow warriors are in the movie as a counterpoint to the all-female warriors, the Dora Milaje. Attuma in particular is the direct antagonist for Okoye, according to producer Nate Moore.

“Okoye’s a powerful character in that she’s charismatic without saying a lot. In finding our Attuma, who ends up being a foil to Okoye through most of the film, we needed to find an actor who had a similar skill set—someone who wouldn’t necessarily need a lot of dialogue, who had a physicality that was very obvious, who looked iconic.”

Actor Alex Livinalli previously talked about Attuma and his personal characteristics, saying, “Yes, he’s a fighter. But the way I see him, he’s just a very lovable person. He has love for his people, for Namor, for Namora, for his way of life—he’s kind of like a father protecting his family. That’s who Attuma is: ‘If you compromise our way of life, you’re gonna see how much I love fighting.’”

Attuma is blue-skinned like the rest of his people and wears a breathing apparatus when he’s out of water. The Talokan people have their abilities because they have their own vibranium flowers. In the comics, Attuma is a villain and often attacks the surface world, usually directly disobeying Namor’s wishes.

Namora is Namor’s cousin (shocking, considering the name), and she serves as his second in command. She looks up to Namor and considers him a paternal influence on her life. Mabel Cadena explained that Namora is “ready to protect Namor and protect his people and fight to the death for all of them. Namora is a strong woman. She can be a warrior. She can be a princess. She can be different things.”

Toward the end of the movie, Namor tells her that even though he lost to Wakanda, it was more of a tactical move because Wakanda has no allies and Talocan is the only kingdom that can help them. Namor said they will be ready when the world attacks Wakanda.

Aneka is a higher up in the Dora Milaje. She’s not just someone who falls in line, however. She’s fairly feisty and doesn’t mind trying new tactics. She’s also rebellious. One of the more striking parts of the movie is when she teams up with fellow Dora Milaje member Ayo.

In one of the scenes, the two fight together, something screenwriter Joe Robert Cole said was a fun scene to write. “It’s a really interesting dynamic that we haven’t seen before,” Cole said. “Seeing Ayo and Aneka fighting back-to-back is really exciting.” The two also share a romance in the movie.

Coel confirmed this and said that relationship was what made her want the role. “That sold me on the role, the fact that my character’s queer. I thought: I like that, I want to show that to Ghana.”